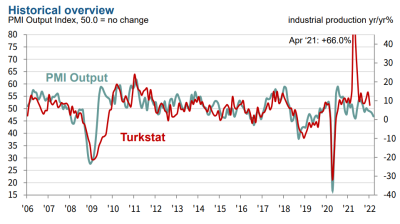 Turkey's manufacturing industry in March contracted for the first time in 10 months, according to the latest headline purchasing managers' index (PMI) compiled by Istanbul Chamber of Industry and S&P Global. The PMI for March posted 49.4, below the 50.0 no-change mark. Impacts of the Ukraine war combined with Turkey's ongoing economic turmoil tipped the index into negative territory.

Andrew Harker, economics director at S&P, said: “The Russian invasion of Ukraine adds a further challenge to those faced by Turkish manufacturers at present, and impacted the sector in a number of ways during March. Already fragile demand was weakened further by the uncertainty caused by the war, while inflationary pressures were exacerbated and supply chains further disrupted.”

Turkish manufacturers' supply chains remained stretched at the end of the first quarter, the survey compilers noted, adding: "Although both new export orders and employment continued to increase, the respective rates of expansion slowed and were only marginal."

Output and new orders moderated for the fourth and sixth successive months, respectively, in March, with the slowdowns in both cases more marked than those seen in February.

While total new orders moderated, new business from abroad continued to rise amid some improvements in international demand. That said, here too the invasion of Ukraine impacted negatively, leading to a softer pace of expansion.

"The rate of job creation also slowed, easing to the weakest in the current 22-month sequence of rising employment."

Currency weakness and the war in Ukraine contributed to higher raw material prices in March for Turkey's manufacturers S&P also said, saying that the rate of input cost inflation remained elevated, but eased to a five-month low. A number of firms pointed to higher oil prices.

"Meanwhile, the rate of output price inflation accelerated and was among the sharpest on record as higher input costs were passed through to customers. Suppliers’ delivery times lengthened again amid difficulties for vendors obtaining materials, the war in Ukraine and price rises. Moreover, the rate of deterioration in supplier performance was the strongest in three months," S&P said.

Firms scaled back their purchasing activity at the fastest pace since May 2020 in response to lower new orders and reduced production requirements, the PMI survey also showed.