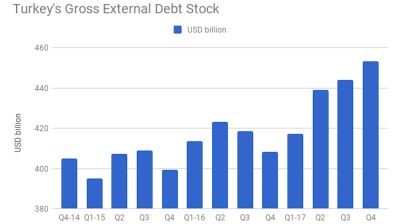 Heavy dependence on external borrowing is a sharp reality in Turkey due to the country's chronic current account deficit. Debt-financed consumption has been the prime feature of the remarkable economic growth achieved by the country during much of the past decade, while the private sector’s share in total external borrowing has been on the rise in recent years.

Turkey’s foreign-currency corporate debt amid the country’s debt-fuelled and consumption-driven growth boom is equal to about 40% of economic output and its cost is climbing every day, putting the nation’s companies in a tight spot, Bloomberg reported on March 29.

With an eye on addressing the risk generated by Turkey’s corporate debt and defending the lira, the government has decided to restrict hard-currency borrowing for some of the smallest companies from May. Larger borrowers will be told to hedge against their exposure.