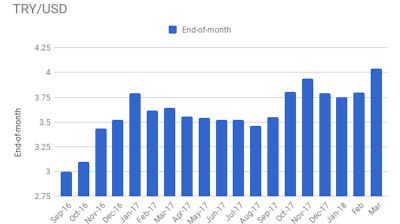 The Turkish lira (TRY) tested a new record low of 4.0368 against the dollar during early trading hours of March 23 as anxiety over Donald Trump triggering a US-China trade war combined with existing concerns over worsening economic imbalances in Turkey’s economy.

March 23 also saw the cost of insuring exposure to Turkish debt grow to very slightly short of the three-and-a-half month highs recorded earlier this week. Five-year credit default swaps (CDS) for Turkey rose 4 basis points from March 22’s close to 200 bps as Turkish assets sold off across the board, Reuters reported. This was just shy of the 201 bps reached on March 20.

The TRY’s drop to an all-time low seen during Asian trading hours was probably due to stop-loss orders from Japanese retail investors holding TRY trades against the yen, Koji Fukaya, CEO of FPG Securities in Tokyo, told Bloomberg.

Cemil Ertem, a top economic advisor to Turkish President Recep Tayyip Erdogan, said early on March 23 during a live broadcast on state-run TV channel TRTHaber that fluctuations in the TRY to more than 3.85 against the dollar were speculative and pushing the central bank for rates hikes to deal with temporary volatility in the currency would not be proper.

The central bank has in the past six years employed rate hikes when the lira depreciated by around 10% over a three-month period, William Jackson, an economist at Capital Economics, noted, adding that he would not expect the regulator to intervene before the 4.25 level.

Looking at the likely horizon for the TRY, it is not just Trump’s introduction of major tariffs against Beijing which has unsettled markets. The US president’s nomination for national security advisor of uber-hawk John Bolton, has added to worries over geopolitical tensions that could hurt demand for risky assets.

RIMMER: Turkey - Let nothing astonish you
Mocked as the ‘Nebati Comet’, Turkey’s finance minister is accused of baffling the markets
OUTLOOK: 2022 Turkey

US warns Belarus to keep its commitment to neutrality
10 hours ago
US Secretary of State Blinken in Kyiv, warns Russia could attack “at very short notice”
11 hours ago
Defence agreement between Slovakia and the US divides politics and society
23 hours ago
Uzbekistan launches production of military drones
1 day ago
New impetus between Bulgaria and North Macedonia at top-level Skopje meeting
1 day ago