Corruption rankings are serious business. Like other graded institutional assessments—such as best universities, hospitals or restaurants—a favourable rating on a corruption index can boost a country’s reputation and attract foreign capital, while a poor rating can reinforce investor uncertainty and constrain opportunities.

bne IntelliNews recently reported on the generally lacklustre performance of the Western Balkans in the 2019 edition of Transparency International’s Corruption Perceptions Index (CPI). As implied in the article, continued stagnation—particularly on the part of North Macedonia and Albania, the two lowest-ranked countries in the group—could hinder the region’s progress toward EU membership.

There are questions about whether the CPI, with its focus on perception, is the best way to evaluate the effectiveness of a country’s anti-corruption efforts. It is also worth asking whether a CPI score provides meaningful information about a country’s efforts to foster a better ethical climate. While a top-line score can be helpful for ranking purposes, a score that more accurately reflects the factors contributing to the condition—not just perceptions of the condition—will provide a better foundation for business and government decisions regarding corruption and risk.

Anti-bribery business organization TRACE’s Bribery Risk Matrix relies on data from a range of international and non-governmental sources to examine the conditions in each jurisdiction that are likely to have an effect on bribery risk. These include the volume and character of bureaucratic interaction, the state’s capacity to prosecute corrupt behaviour, governmental transparency, and the ability of the press and civil society to act as a check on abuses.

The TRACE Matrix yields a somewhat more optimistic assessment of the Western Balkans than the CPI. The average Matrix rank for the six countries is 84th out of 200, compared to 95th out of 180 on the CPI.

Most dramatically, Kosovo is ranked 45th out of 200 on the Matrix, but 101st out of 180 on the CPI. The difference largely tracks the government’s efforts over the past decade to simplify and streamline administrative processes—reducing, for example, the number of procedures required to start a business from nine to three, and the average time to complete the process from 52 days to 5.5. The underlying principle is that less red tape makes it harder for civil servants to demand bribes, and easier for businesses to resist such demands.

What about North Macedonia and Albania, both of which are awaiting a date to begin EU accession negotiations? According to the Matrix, the two countries rank in the middle of the pack, with North Macedonia ranking 85th and Albania 95th out of 200—a somewhat rosier assessment than the CPI’s finding that the two tied at 106th out of 180.

But rankings alone do not tell much of a story. For more informed analysis, it is helpful to examine trends in the underlying data. Using the Matrix Data Browser, we can compare North Macedonia’s and Albania’s progress over time in administrative streamlining [see Figs. 2 and 3]. Both show considerable reduction in red tape between 2005 and 2014, though North Macedonia’s is notably more significant than Albania’s. After 2014, however, the World Economic Forum’s assessment of the burden of government regulation in North Macedonia returned to its comparatively poor pre-reform levels, even though the time required to complete various governmental functions has remained low. There has also been a recent drop in the application and enforcement of government regulations without improper influence, according to the World Justice Project. 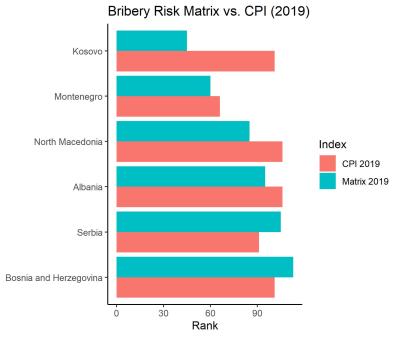 Albania’s regulatory burden showed some initial relapse between 2011 and 2013, but then corrected course and has largely retained its progress. A more complete picture would require closer examination of other factors as well—e.g., enforcement, transparency, civil society oversight—but we might start by asking whether Albania’s late-aughts administrative reforms were carried out in a more balanced fashion than North Macedonia’s, yielding more stable improvement.

As these countries continue to strive for EU membership, any discussion of their progress in fighting corruption should be informed by a detailed understanding of the nature and effectiveness of their efforts. Failing to move the needle on the CPI is not enough to warrant despair. 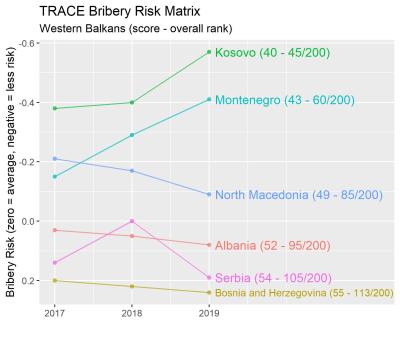 ED: see a copy of the full report here