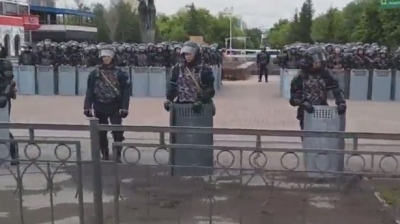 The morning after. Riot police on standby for more trouble on June 10 following the previous day's election demonstrations.
By bne IntelliNews June 10, 2019

Kazakhstan has elected Kassym Jomart-Tokayev, officials said on June 10, as the country digested the implications of the intense protests that broke out on election day resulting in the arresting of hundreds of people.

Nazarbayev, who ruled for three decades after Kazakhstan won independence from the Soviet Union, was used to winning presidential elections with more than 90% of the vote and analysts will now ask whether officials are giving an inch in the face of mounting pressure from the many Kazakhs who feel their country does not offer a true democracy and that the oil-rich state does not fairly share out the spoils.

What observers saw as the stage-managed election of Tokayev, 66—Nazarbayev, 78, is widely seen as still ruling from behind the scenes—produced the largest protests the country has seen in years in the capital, Nur-Sultan, and largest city Almaty. Rainy weather may have been a factor in there being a lack of follow-up night-time protests, and demonstrators also have no high-profile leader or organisation to cohere around, but by lunchtime on June 10 there were social media reports of some protests in Almaty, with Radio Azzatyk saying 20 had been detained. There were also reports of mobile internet coverage being down, with the finger being pointed at the authorities.

Human Rights Watch has said the idea of there being a democratic handover of power in Kazakhstan is "an illusion", but Tokayev insisted the vote was democratic and open. Out on the streets, however, it was not difficult to find people dismissing that line.

“What’s the point..?”
“I am boycotting this election,” one demonstrator in Almaty told bne IntelliNews.

“What’s the point of a ruler who does not care about his subjects?” said another demonstrator. “Anyone is a better gamble than the same person we’ve had for more than 30 years,” he added, referring to his belief that Nazarbayev is essentially still in power.

Many Kazakhs believe that Tokayev is a temporary transitional figure, with Nazarbayev planning to eventually replace him with a true successor, namely his daughter Dariga Nazarbayeva.

Some protesters angered at the lack of fair elections positioned themselves as supporters of fugitive banker Mukhtar Ablyazov, who has been issuing calls on Facebook and Youtube for his followers to focus on staging rallies.

Other demonstrators declared themselves supporters of veteran opposition leader and journalist Kosanov, who was the only real opposition figure taking part in the election. Kosanov’s supporters were encouraged to participate in the election, as they consisted not only of his voter base, but hundreds of volunteers across the country who signed up as election observers. The success of the campaign to attract election monitors caused officials to call in the intelligence services who were ordered to scrutinise the credentials of those signed up.

Kazakh spring campaign
As disappointment spread at the prospect of the Nazarbayev era continuing from the shadows, a campaign calling for real change sprung up on social media, using the hashtags #qazaqkoktemi (Kazakh spring) and #menoyandim (I’ve woken up). A new movement called Wake Up, Qazaqstan has emerged from it, calling for democratic reforms.

The “wake up” theme stems from a 1909 poem written during Russian colonial rule. “Wake up, Kazakh! Think, Kazakh! Be, Kazakh!” it reads. “We are a nation that has forgotten its freedom.” The movement is inspired by “a yearning for freedom”, Anuar Nurpeisov, an actor behind the original Instagram campaign, told the Guardian. “This generation is tired of living under the leadership of people who grew up in the Soviet Union.”

Local news outlets reported estimates that 700 protesters took part in the demonstration in Nur-Sultan and around 300 participated in rallies in Almaty, though the Almaty figure was likely much larger as the total number arrests there numbered around 400, according to RFE/RL's Kazakh Service.

One person arrested was Agence France-Presse and Eurasianet correspondent Chris Rickleton, who was detained in Almaty.

“In a police van after being detained for carrying out my professional activities. Black eye sustained during a rough arrest. I fell on a policeman's knee and was not struck deliberately. My accreditation was taken from me,” Rickleton wrote on Twitter.

Protests to continue?
One exit poll, conducted by local pollster Kogamdyk Pikir Institute, gave Tokayev 70.13% of the vote, with Kosanov taking 15.39%. Many of Kosanov’s supporters claim he received a much bigger share of cast ballots.

An unofficial coordinator assigned to persuade people to sign up as election observers, Ermek Narymbai, a Kiev-based opposition member in-exile, urged Kosanov’s supporters over Youtube to continue protesting at night time around city and regional government buildings as polling stations were apparently refusing to share copies of their election protocols with observers.

But bne IntelliNews spotted no protests taking place between 02:30-03:00 local time during an early hours walkabout in Almaty. The prolonged showers—also the case in Nur-Sultan—may have had something to do with that. Narymbai later stepped up calls for demonstrations to take place on June 10.

Several videos posted by Kazakh citizens and election observers have, meanwhile, emerged, attempting to shed light on alleged evidence of the falsification of pro-Tokayev votes.

Another video demonstrated that anything written with ink-based pens provided at one polling station could easily be removed using a lighter trick.

Slovenia ranks first in emerging Europe in social mobility
Kazakh fugitive banker Ablyazov to face in-absentia trial in Moscow
How interconnected are the economies of Russia, Ukraine, Belarus and Kazakhstan? Inflation and rates outlook for 2020