Radiant fatherland? Pull the other one 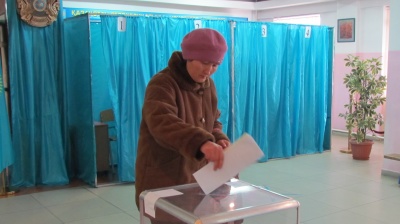 When a campaign to recruit election observers became a bit too successful, the authorities even called in the intelligence services. Their work might disqualify some of the recruits.
By Nizom Khodjayev in Nur-Sultan June 7, 2019

It is, unfortunately, a foregone conclusion that this piece starts off by telling the reader that the result of Kazakhstan’s snap presidential election on June 9 is a foregone conclusion. Interim President Kasym-Zhomart Tokayev, who made his way up to the helm after ruling autocrat of three decades Nursultan Nazarbayev decided to step down in March at the age of 78, will be declared the winner of the choreographed so-called contest. Since Tokayev was handpicked by Nazarbayev, the ex-president has managed the succession process from his position behind the scenes where he still holds a grip on essential powers.

In the elections he faced, Nazarbayev posted victories with rather unrealistic rates of voter backing, surpassing 90%. A similar scenario is most certainly being prepared for Tokayev, although observers wonder whether he might end up officially taking appreciably less of the vote than what his predecessor managed (perhaps that would be only proper given the subservience expected of Tokayev to “Elbasy”, or Leader of the Nation. Tokayev’s first act as interim leader was to rename the Kazakh capital Astana as Nur-Sultan).

The illusion of unquestionable majority support from society has a functional purpose. Those who oppose the ruling regime would likely be more inspired to turn their feelings into action in an environment where approval for the ruling Nur Otan (“Radiant Fatherland”) party’s representative is revealed as significantly weaker than the autocratic government would have everyone believe. But the supporters of one candidate taking part in the election are hoping to break the illusion, even if only a little.

Five stalking horses
A total of seven candidates are registered for the snap vote. Five candidates are stalking horses simply used to create an illusion of plurality. They are Jambyl Ahmetbekov of the Communist People's Party, Dania Yespayeva of the Ak Zhol party, Toleutai Rakhimbekov of the Auyl party, Amangeldy Taspikhov of the Federation of Trade Unions of Kazakhstan and Sadybek Tugel of the Uly Dala Kyrandary party.

In April, the Nationwide Social Democratic Party of Kazakhstan (NSDP), the only registered party in the country that positions itself as an opposition party to the ruling party, announced a boycott of the election as it holds no chance of winning.

And then, to everyone’s surprise, the country's Central Electoral Commission permitted a government critic to run for president for the first time in 14 years. The critic is Amirzhan Kosanov, an opposition journalist, who was registered on May 6 under the banner of the Ult-Tagdyry (Destiny of the Nation) party. Kosanov has no chance of winning of course, but his supporters seem bent on using the opportunity to vote for him to strip Tokayev of a victory capturing more than 90% of the vote.

“How to” be an election observer
An opposition activist in-exile, Ermek Narymbai, has been rallying supporters on YouTube and Facebook to take part in an effort to register enough opposition-aligned election observers to cover at least half of the 10,000 polling stations around the country. The initiative appears to be spearheaded by another opposition figure, Dos Koshym, a political analyst and chairman of the Ult-Tagdyry movement that nominated Kosanov. Videos of Koshym’s “How to” guide on joining the ranks of the election observers have surfaced on social media in recent months.

The basic reasoning behind the activism is that Kosanov-supporting election observers would be able to prevent potential falsified votes in favour of Tokayev at certain polling stations.

Narymbai claimed in his videos this week that approximately 2,000-3,000 opposition observers have been registered across Kazakhstan. Yet he also alleged that the authorities began cracking down on the effort to assign them by unofficially banning organisations from registering any more observers and involving the Kazakh state security services (KNB) in possibly disqualifying some of the opposition observers appointed.

The chances of the observation effort succeeding appear slim, in the light of the Kazakh authorities’ keen awareness of it, but its existence is indicative of deeper political discontent brewing within the nation of 18mn. Much of this has been expressed in protests seen throughout Kazakhstan in the past four months.

Recovery not felt by ordinary Kazakhs
Protests against poor living conditions have been held across the country since early February, reflecting general dissatisfaction with quality of life standards and government policies. Despite the Kazakh economy recovering in 2017 and growing at 4.1% in 2018, ordinary Kazakhs say they have not felt the benefits of this recovery. Nazarbayev announced in February a drawdown from the country’s rainy day fund of $3.6bn for improving public sector salaries and social benefits, including support for single mothers. The effects of this initiative do not seem to have been sufficient as protests in the capital, Nur-Sultan, continued this week—the government had promised to follow through with all of its populist pledges by June 1.

Going forward, addressing livelihoods needs to be a priority issue on Tokayev’s agenda—if ignored, the problem could develop into a perfect Molotov cocktail for sparking political instability.

The potential for trouble ahead has been shown by what the BBC suggested was an “unprecedented” surge of activism among the youth. The hashtag "I have a choice" (#уменяестьвыбор) quickly spread on social media, its report noted, with. students gathering to discuss how to become election observers and make their voices heard. "On the surface, everything here looks fine. But when you scratch the surface, it's just ugly," Asya Tulesova was quoted as saying.

Tulesova and another activist Beibarys Tolymbekov displayed a banner at the Almaty marathon, reading: "You won't run away from the truth". For their actions, they were sentenced to 15 days' detention for violating the public assembly law. One activist was even detained for holding a blank poster. When he asked why he was being detained, a policeman replied: "We'll figure it out". He was held briefly before being released.

As Human Rights Watch senior researcher Mihra Rittman concluded on June 5: “Everything about this so-called transition [from Nazarbayev to Tokayev] has been carefully orchestrated and highly controlled—an approach the Kazakh authorities have long employed to regulate and restrict its citizens’ political and civil lives.

“Kazakhstan is Central Asia’s most powerful economy, with the ambitious goal of joining the 30 most developed countries in the world by 2050. How the president-elect manages the expectation in parts of society for a genuine transition while continuing Nazarbayev’s legacy will be crucial in shaping the future of a country determined to play a bigger global role.

“These recent protests suggest that the younger generation will demand greater respect for free speech, but it will be an uphill battle.”

Slovenia ranks first in emerging Europe in social mobility
Kazakh fugitive banker Ablyazov to face in-absentia trial in Moscow
How interconnected are the economies of Russia, Ukraine, Belarus and Kazakhstan? Inflation and rates outlook for 2020