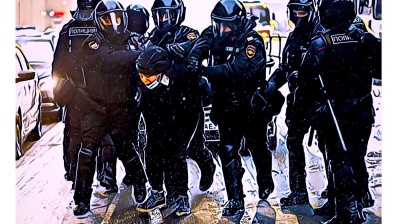 Thousands of protesters took to the streets in central Moscow following a court’s decision to sentence anti-corruption activist and opposition politician Alexei Navalny to 2.8 years in jail. A total of 1,408 people were arrested during the course of the evening. / wiki
By Ben Aris in Berlin February 3, 2021

Thousands of protesters took to the streets in central Moscow following a court’s decision to sentence anti-corruption activist and opposition politician Alexei Navalny to 2.8 years in jail on February 2.

They were met with a heavy and brutal police presence that locked down the centre and attacked groups of protesters indiscriminately. A total of 1,408 people were arrested over the course of the evening, according to NGO OVD Info.

In the closely watched case the judge upheld the prosecutor’s demands to transmute a 3.5-year suspended sentence issued in the 2014 so-called Yves Roche fraud case into real jail time after Navalny allegedly broke the terms of his parole. The sentence was reduced by almost a year as Navalny had already spent a year under house arrest.

Nationwide protests erupted on January 23 shortly after Navalny returned to Russia and was promptly arrested at the border. While the demonstrators have demanded Navalny's release, they are as much anti-government protests against the Kremlin’s arbitrary use of the law to suppress political opposition. Navalny has tapped into the dissatisfaction of the KoZa, or “Coalition of the Fed Up,” as bne IntelliNews columnist Mark Galeotti dubbed it in an opinion editorial earlier this week.

OMON riot police quickly moved in to shut down access to the centre of Moscow and brutally beat any group of protesters they came across.

As the crowds confronted the police they raised their hands over their heads and shouted: “We are unarmed!” The Russian constitution gives citizens the right to peaceful assembly to protest, but the authorities introduced an administrative requirement to get a permit to demonstrate, which they use to prevent demonstrations.

Despite the peaceful nature of the demonstration the OMON charged the crowds and began to indiscriminately beat the protesters with truncheons.

Video shared on social media showed officers blatantly targeting journalists, despite the fact they are now forced to wear bright yellow jackets that are clearly marked “press” and their credentials on a lanyard, according to rules issues by the Ministry of the Interior. In one incident an OMON officer walked up to a journalist and hit him in the head with a truncheon, knocking him to the ground, seemingly without provocation.

The central streets around Red Square were closed to pedestrians and metro stations closed. The internet in the centre of the city was also turned off. However, the roads were still open to traffic. Drivers began honking their horns in support of the few protesters on the street and began to drive slowly, closing down the roads in a gridlock, reminiscent of tactics used in Belarus Russia. OMON officers began to remove honking drivers from their cars and detaining them, but were unable to move their trucks around as the centre of the city came to a standstill.

As Navalny leaves for a labour camp somewhere in Siberia, the rest of Team Navalny has vowed to fight on. Navalny’s wife broke down in tears as the sentence was read out in court and he looked at her and drew a heart on the glass of his holding pen with his finger.

Navalny’s chief of staff Leonid Volkov said from his exile in Latvia, where he has been co-ordinating the anti-government protests, that the movement is “fully prepared to keep fighting.”

“We understand that everything is just beginning. We understand what our task is. This is the moment of our enormous moral superiority. The whole country has witnessed Putin’s fear,” Volkov said in a post on social media.

In a sign of how closely Navalny’s trial is being watched, the international condemnation of the sentence was almost immediate as a storm of protest tweets were released by foreign ministers from around the world.

“The United States is deeply concerned by Russia’s actions toward Aleksey Navalny. We reiterate our call for his immediate and unconditional release as well as the release of all those wrongfully detained for exercising their rights,” the newly appointed US Secretary of State Antony Blinken said in a tweet shortly after the sentence was announced.

bneGREEN: Is coal killing us all?
Kyrgyzstan's Peak Putin becomes a case of 'pique Putin' as protesters plant Ukrainian flag atop mountain
Nine out of 10 Russians oppose concessions in exchange for end of sanctions