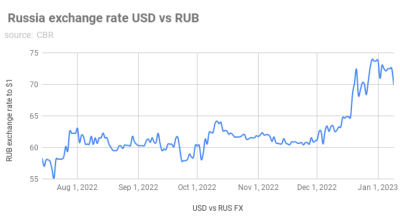 The ruble put in sharp losses against the dollar in the run up to the holidays but has started to recover the ground lost as the New Year starts. / bne IntelliNews
By bne IntelliNews January 10, 2023

On the first working day, the ruble rose in price against the dollar and the euro to a level that was recorded at the end of last year, having won back all its losses over the holidays as of January 2. (chart)

Analysts cite rising oil prices as the main reason for the growth of the Russian currency, the cost of which is growing against the backdrop of the end of the holidays and the lifting of coronavirus restrictions in China, The Bell reports.

The active strengthening of the ruble on the first working day after the holidays is due to rising commodity prices – both oil and gas are becoming more expensive, writes BCS Express.

In addition to the positive influence from the commodity market, the strengthening is due to the fact that many Russians bought foreign currency before the long New Year’s Eve weekend, fearing the fall of the ruble during the break, but have been selling their dollars again now the holidays are over, analysts say.

In December last year, the value of the ruble suddenly slipped in value ahead of the annual tax payment period. It fell until December 20 to below RUB71 per dollar after several months of stable trading in the RUB60-63 corridor.

Analysts said many factors went into the fall: the new oil price cap sanctions, the seasonal demand for currency and rising geopolitical tensions.

But analysts also allowed for the possibility of speculation in the market, noting anomalous activity: the weakening of the ruble before the tax period is beneficial for exporters, who have received less revenue for the full year due to the overvalued Russian currency. The ruble’s slide stopped in the third week of December just as the tax period came to an end.

At the end of last year, analysts polled by The Bell predicted that the ruble would return to growth in January, and it has. At the beginning of the year, exports traditionally grow, while imports decrease, which has a positive effect on the Russian currency, said Sofia Donets, an economist at Renaissance Capital.