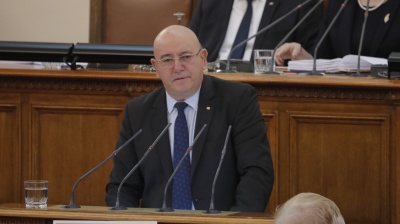 Bulgaria’s parliament approved the nomination of Emil Dimitrov as the next environment minister on January 15, to replace Neno Dimov who resigned after being accused of abuse of office leading to a serious water crisis in the town of Pernik.

Dimitrov, nicknamed Revizoro ("The Auditor"), has no background in environmental protection and his nomination was accepted with mixed reactions among experts who fear he will not be able to resolve the issues inherited from Dimov – the ninth minister to be replaced in the government so far.

The nomination was backed by the ruling coalition between Gerb of Prime Minister Boyko Borissov and the far-right United Patriots.

Dimitrov is from the quota of ruling Gerb’s junior coalition partner, the far-right United Patriots, comprised of VMRO and the National Front for Salvation of Bulgaria (NFSB). A third far-right party, Ataka, was also a member of the United Patriots, but was expelled from the coalition.

Dimitrov is an economist who has headed the Customs Agency. His priority will be to carry out an in-depth audit of the whole water supply system in the country in order to prevent future water supply crises.

Dimov resigned on January 10 after being arrested and formally charged with abuse of office due to the crisis.

Documents published by independent investigative news outlet Bivol.bg show that significant quantities of water have been diverted from the Studena dam that supplies the town through an illegal canal. It has also published documents showing that, despite the falling level of the Studena reservoir, which has almost dried up, Dimov signed documents allowing the use of water for industrial purposes.

On January 10 Angel Kunev, the prosecutor leading the investigation, said that plenty of documents were found during raids at the environment ministry and Dimov’s home proving that in the period between the beginning of 2018 and November 2019 he was aware of the situation and had been warned routinely that the level of the Studena reservoir was decreasing. Despite that, Dimov signed documents allowing its water to be used by two companies, steel producer Stomana and heating utility Toplofikatsia – Pernik.