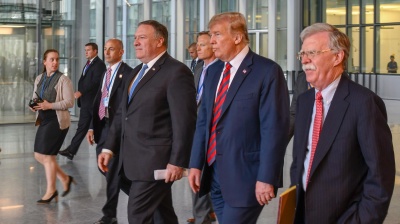 For those worried what a combination of uber-hawks Mike Pompeo and John Bolton with King of the Kakistocracy Donald Trump might eventually cook up in the Middle East, unsettling reports emerged in the US last week that the US State Department is expected to designate bogeyman Iran’s Islamic Revolutionary Guard Corps (IRGC) as a foreign terrorist organisation.

Former Under-Secretary of State and lead Iran negotiator Wendy Sherman got straight to the point when asked by Reuters what implications the move might have. “One might even suggest, since it’s hard to see why this is in our interest, if the president isn’t looking for a basis for a conflict,” Sherman responded. “The IRGC is already fully sanctioned and this escalation absolutely endangers our troops in the region.”

The news agency on April 5 cited three US officials as saying that Washington—which has never before labelled another country’s military as a terrorist group—might announce the move as early as April 8.

Vicious sanctions regime
So vicious and unparalleled is the US sanctions regime imposed against Iran last year that many analysts have long suspected that the White House is pushing for far more than a renegotiation of Iran’s role in the Middle East. They suspect that the likes of national security advisor Bolton and US secretary of state Pompeo won’t be happy until they see regime change. Whether some Trump administration officials truly believe that a hot war with Iran could be in the president’s interests, building up to his re-election campaign in 2020, is the question.

The decision to go after the IRGC in such an aggressive way could, if implemented, open US military and intelligence officials to similar actions by various unfriendly governments abroad.

The administration’s decision to make the designation was first reported by the Wall Street Journal.

The US has already blacklisted dozens of entities and people for affiliations with the IRGC. The organisation as a whole, however, has not been designated. In 2007, the US Treasury designated the IRGC’s Quds Force, the unit in charge of the Guard’s operations abroad such as in Syria and Iraq. The designation was “for its support of terrorism” and for being Iran’s “primary arm for executing its policy of supporting terrorist and insurgent groups.”

IRGC commander Mohammad Ali Jafari said in 2017 that if Trump made the move, “then the Revolutionary Guard will consider the American army to be like Islamic State all around the world”.

The weekend brought the first Iranian response to the reports that Trump is indeed about to give the go-ahead to designating the IRGC, a force that somewhat ironically and arguably played a bigger role in destroying Islamic State in Iraq than the US did (not mentioned by Trump in any of streams he uses when he is filled with the urge to defecate, as far as this blog is aware). Iranian MPs said they would prepare reciprocal action against the US, Islamic Republic News Agency (IRNA) reported on April 7.

“We will answer any action taken against [the IRGC] force with a reciprocal action,” a statement issued by 255 of the Iranian parliament’s 290 Iranian lawmakers said.

It added: “So the leaders of America, who themselves are the creators and supporters of terrorists in the [Middle East] region, will regret this inappropriate and idiotic action.”

Iran-aligned Shi’ite militia
The idea to officially list the Guard as “terrorist” was mooted by US officials as far back as 2017. Iran responded that if the US made the categorisation it would see the US armed forces in the same light.

Such warnings are not to be taken lightly by US forces in places such as Iraq, where Iran-aligned Shi’ite militia are to be found in close proximity to US troops.

On April 7, Iran’s Supreme Leader Ayatollah Ali Khamenei, not commenting directly on the IRGC issue, advised Iraq that it should force the US military to leave the country “as soon as possible”.

His comments came following a meeting with Iraq’s visiting Prime Minister Adel Abdel Mahdi, who is under pressure from the US to cut ties with Iran in all sectors including energy and trade in general.

"You should take actions to make sure the Americans withdraw their troops from Iraq as soon as possible because wherever they have had an enduring presence, forcing them out has become problematic," Khamenei told Abdel Mahdi.

"The current government and parliament in Iraq and the political figures are not what the US desires; they plot to remove them from the political scene of Iraq," Khamenei said, according to his official website.

Protector of clerical system
The IRGC was formed after the 1979 Islamic Revolution. Its objective as Iran’s most powerful security organisation is to protect the Shi’ite clerical ruling system. It has control over large sectors of the Iranian economy—estimates on how much of Iran’s GDP its businesses are responsible for range into huge figures but are unconfirmed—and it has a big influence in the Iranian political system.

Boasting army, navy and air units and estimated as 125,000-strong, it answers directly to Khamenei.

The IRGC’s Quds Force, led by Major-General Qassem Soleimani (or Suleimani), has particularly upset Pompeo. He has often made direct criticisms of Soleimani. Previously, in 2017, when he was CIA director, Pompeo wrote to Soleimani and other Iranian leaders warning that the US would hold them accountable for any attacks on US interests in Iraq by forces under their control.

Last year, Pompeo said of Soleimani that he was responsible for the deaths of Americans in Syria and Iraq, remarking: “This is a man who has American blood on his hands. He’s killed American soldiers, and that’s not funny.”

Soleimani likens Trump to “nightclub owner”
In late July last year, Soleimani squared up to the US president in a speech, mocking the threats he had lately made to Iran on Twitter, likening him to a gambler and nightclub owner, deriding the performance of US armed forces in Afghanistan and warning that the Red Sea region was no longer secure for the American military.

He said Trump should know that the Islamic Republic would be the one to “end” any war between their two countries.

“I’m telling you, Mr Trump the gambler, I am telling you: know that where you are not thinking of, we are near you. Places you cannot imagine, we are next to you,” he added.

In further menacing words aimed at Trump, he said: “We, the Iranian nation, have gone through tough events. You may begin a war, but it is us who will end it. Go ask your predecessors about it. So stop threatening us. We are ready to stand up against you. The Red Sea which was secure is no longer secure for the presence of American [military]... The Quds force and I are your match. We don’t go to sleep at night before thinking about you.”