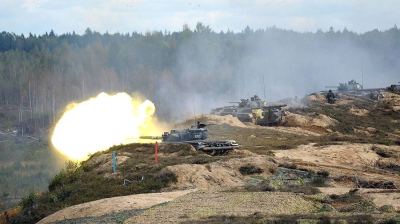 Zapad wargames a a full-scale conventional defence against an advanced enemy in land, sea, and air operations.
By Mark Galeotti of the Institute of International Relations Prague September 20, 2017

As of writing, Russia’s military exercise, Zapad, has moved into its second phase. This is wargaming a full-scale conventional defence against an advanced enemy – Nato by any other name – in land, sea, and air operations. Despite exaggerated concerns that this would be some pretext for an invasion, Zapad is so far turning out to be exactly what one would have expected: a genuine test of Russia’s capabilities, a showcase for its advanced systems, and a piece of political theatre for domestic and foreign consumption. As usual, the “home” side is winning, but how well is it really doing?

The quadrennial Zapad (West) exercises are just part of a wider complex of activities, including snap inspections and drills and several other joint exercises, including Combat Commonwealth in Central Asia and Russo-Chinese Joint Sea naval drills further east. Together, they are meant to both measure and display Russia’s capability to inflict serious amounts of pain on the enemy using a full array of capabilities, from long-range missile strikes to close-quarters land battle. While there is little real difference between “offensive” and “defensive” capacities, what is striking is that the scenario being played out is about compelling an external aggressor – one which began the conflict through stirring up local unrest, before escalating to full invasion – to withdraw.

This does not mean that President Vladimir Putin’s Kremlin is a much-maligned commune full of pacifists, especially given the aggressive political intent discussed below. But it does reinforce the basic point that, even if based on a serious misunderstanding of events around the world such as the Ukrainian revolution (which it regards as a European power grab and an American plot), it feels it is at threat.

This helps explain, in part, Putin’s continued determination to spend more than Russia needs or should on its military. However, a concentration on buying new equipment, perhaps reflecting a desire to cushion the country’s defence industries, is distorting the overall effect.

The defence budget shrunk by 5-7% this year (the official figure is 7%, but there are reasons to suspect a little creative accounting) and is due to shrink again in 2018. Putin claimed that next year’s plan “includes military budget cuts, yet it will have no effect on the rearmament of our army and navy”.

However, there is no way Russia will meet its ambitious original target of modernising 70% of its Soviet-era kit by 2020 (which would require 10% year-on-year increases in spending). Already, a number of projects have been quietly pushed back or scaled down on financial grounds, such as the Tupolev PAK DA stealth bomber, originally to be fielded in 2020, now 2025.

Besides which, if procurement is to be ring-fenced, then the cuts will fall disproportionately on training, maintenance, and pay and conditions for officers and men. As new, advanced systems such as the T-14 Armata tank, S-500 anti-aircraft missile complex and drones come into service, the technical skills of Russia’s soldiers will be tested as never before. With half of them still conscripts, serving short, 12-month terms, this burden will largely fall on the professionals. If pay and conditions suffer, as well as training, it will be harder to recruit and retain qualified personnel, and also to bring their skills to the required standard.

There is also a double bind over arms exports. Exercises such as Zapad, as well as ongoing operations in Syria, are also opportunities to show the armies of the world what Russia can offer. Aircraft such as the Sukhoi Su-35 and Su-30M, which have played a major role in Syria, have been selling well, for example.

Exports play a crucial role in supporting research and development and keeping the defence industries tooled up and solvent. According to Dmitry Shugaev, Director of the Federal Service for Military and Technical Cooperation, as of the end of August, the book order figure is $47bn-50bn in exports, with combat aircraft accounting for half of this.

This is a serious lifeline, but as a result, Russia’s own procurement needs often take second place. Some modernisation programmes are behind for structural reasons (such as the loss of the gas turbines needed for new frigates, which used to be imported from Ukraine), some for technical reasons (such as Sarmat RS-28 ICBM), but others are simply backlogged behind export sales.

For all that, 17 years of attention paid to the Russian military has certainly not been without effect. It is now not only better-equipped than ever before, it is also better trained and disciplined. The days when the military was better known for alcoholism, bullying and embezzlement than anything else are gone. Even so, this is essentially a regional force, able to fight short, sharp high-intensity wars such as that modelled by Zapad, and also limited out-of-area deployments such as in Syria. That makes it eminently capable of bullying neighbouring states not under the Nato umbrella, as Ukraine and Georgia have discovered. It also gives Putin a greater ability to assert his case for Russia as a major power, and a counterweight to American “hegemony”.

Yet how far is this true, and how far a well-managed bluff? The panic that greeted Zapad in some quarters – variously presented as a platform for an invasion of Poland, the Baltic States, Belarus or Ukraine – is in part bad Western analysis and in part shrewd politics. Either way, it has positioned Russia in the public eye and political mind as a world-class military power. For a president whose geopolitics depend so much on equals parts mindgames and intimidation, he can hardly complain about that.

So while Zapad demonstrates the existential fears at the heart of Russian policy, which help drive it to its current campaigns of aggressive subversion, it also shows the progress that has been made in rebuilding Russia’s military strength – and the extent to which Putin is relying on hype and hyperbole to make up for the rest.