STOLYPIN: Nato is a symbol that Russia is always an outsider 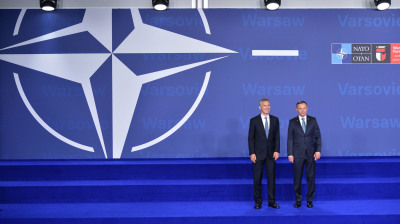 At the Nato summit in Warsaw on July 8-9, leaders, pundits, generals and briefers alike spoke of common will, resolute unity (especially in an era of post-Brexit uncertainty), and the current catchphrase of “deterrence and dialogue” with Russia. Moscow was inevitably rather more sceptical of Secretary General Jens Stoltenberg’s assertion that “Nato poses no threat to any country”. Instead, Putin’s spokesman Dmitri Peskov said “short-sighted” alliance leaders should stop “searching for an enemy in Russia”.

There is an element of stagecraft to all this, a performance in which everyone knows their cues and their lines. Yet at the same time, while Nato understandably focused on what it could do to defend and reassure its members against a perceived Russian threat – or “challenge” to use the more politically correct term – there is often a lack of awareness of quite how things look from Moscow. Too often this is wrongly equated to sympathising with a government that annexed Crimea, stirred up war in the Donbas, and periodically rattles its sabres at Western Europe.

In Russia, Nato is periodically portrayed as a military threat. To Trud, the summit had an “openly anti-Russian agenda” while even the usually more staid Nezavisimaya gazeta asserted that the alliance is drawing up “plans for further confrontation with Russia”. In this, the press is, as ever, simply riffing off the broad melody put out by the Kremlin.

Is this all part of the usual drive to present Russia as assailed in a chaotic but also hostile world, explaining away economic hardship as the machinations of the West, and presenting Putin’s regime as the only guarantor of national sovereignty? In part.

But it also reflects a genuine belief in many quarters that Russia does indeed face a threat. Realistically, this is not a military one. Even with the new battalions deployed in Poland and the Baltic States, there is no Nato force that could launch offensive operations into Russia. In effect, the European theatre is stalemated, which is actually a great boon.

Western hysteria about “Russia’s hybrid war” though, overlooks the way that as far as the Russians are concerned, this way of destabilising regimes through a mix of political, economic and limited military means is very much a US invention. They believe that they are desperately trying to catch up in developing capabilities to wage gibridnaya voina – they have even adopted the Western term, for all that it is actually misleading.

In the Russians’ eyes, this is a new way of war, years in the making. The US-led invasion of Afghanistan was opened with special forces supporting and encouraging locals against the Taliban. The “Arab Spring” risings and post-Soviet “colour revolutions”, including the Ukrainian Maidan, were, they believe, made in the USA (specifically, the CIA campus at Langley, VA). The 2011 intervention into Libya was a relatively brief injection of “kinetic” force in support of carefully curated local militias.

Of course, the CIA is no more capable of neatly toppling governments – and stopping this from leaking to the press within days – than Moscow is of engineering Brexit or the rise of Donald Trump, for all some overheated claims in the West. But the facts are irrelevant in this context compared with the perceptions.

To many in and close to the Kremlin, Russia faces a real threat, not borne by tanks and missiles but cultural influences, economic pressure, and political penetration. This is, in their eyes, a civilizational threat aimed at making Russia a homogenised, neutered, subaltern state.

Faced with the fear of its own “colour revolution” – the colour being a Nato or European Union blue – then Moscow entrenches. The primary driver of today’s Russian foreign policy is defensiveness, after all, a terror that the great global engines of soft and economic power are consigning the country to second- or third-class status.

That said, Putin’s defensiveness is expressed in distinctly offensive ways, the way a scared dog may growl and bite. It would be hard to muster any sympathy for his plight in Kiev or Chisinau, Tbilisi or Tallinn. In this respect, his attempts to protect Russia’s place in the world by staking out a sphere of influence (his geopolitical notions are nothing if not nineteenth-century) explain his adventures in Ukraine and elsewhere.

Nato is the club from which Russia – at least in its Putinist iteration – is forever barred. The Nato-Russia Council and similar structures, while not without some small use, are also symbols precisely that Russia is always an outsider.

In this, Nato runs up against a contradiction that will likely take political generations to resolve. Russia rightly considers itself European (that whole ‘Eurasian’ notion is just a political instrument, used when convenient, put back in the toolbox when not). Yet it also harbours deep suspicions and resentments towards the West. In some cases there are good reasons; Washington in particular deeply mismanaged the relationship in the 1990s. But this is also a way of working out the collective national trauma of 1991, the moment when a “family” (as Russians see it, at least) became a collection of disparate individuals, when a superpower became a punch-line. The hankering after an imaginary past manifest in the Brexit vote in the UK demonstrates how long it takes to get over the post-imperial hangover, and how attractive the opportunity to blame outsiders can be.

So Moscow has tried to build its “own” Nato, as well as its “own” European Union, from the Commonwealth of Independent States, through the Collective Security Treaty Organisation, to the Eurasian Economic Union. All fail, not least because Moscow fails to accept that Nato is not simply “Warsaw Pact 2.0” (as government newspaper Rossiiskaya gazeta put it) but a genuine voluntary association of like-minded nations.

This cargo cultist approach – build the form and somehow the substance will follow – having failed, Russia is faced with the sight of a club whose policies, values and limitations Putin could not stomach, yet which so many of its neighbours and, in its eyes, subordinates clearly are desperate to join.

No wonder the Kremlin is at once scared, perplexed and jealous. Scared because Nato embodies the strength of the West, at once moral and political and also military and economic.

Perplexed because of the mixed messages constantly flowing from its membership. While Polish Foreign Minister Witold Waszczykowski is saying “the world has offered Russia all it could… It changed nothing”, for example, France’s François Hollande is presenting Moscow as a “partner that can, at times, use force”. The implication is that Russia’s propensity towards military action, the very basis for Polish (and other) concerns, could actually be a virtue. Given the Kremlin’s inability to internalise the true democracy at the heart of Nato, no wonder this sounds like misdirection or madness.

The Kremlin is also jealous of Nato, if only it were able to admit it, for reasons of every kind. From the shiny new weapons and economies able to afford them, to a cultural status as the guardian of a Western identity to which Russia aspires. No wonder Nato is also the bogeyman of choice in the Kremlin propaganda narrative: none so bitter as a spurned suitor, no anger so deep as that felt about paths not taken.

Mark Galeotti is an incoming senior research fellow at the Institute of International Relations Prague, a visiting fellow with the European Council on Foreign Relations, and the director of Mayak Intelligence. He blogs at In Moscow’s Shadows and tweets as @MarkGaleotti.