STOLYPIN: Donbas continues to be as unpredictable as it is unloved 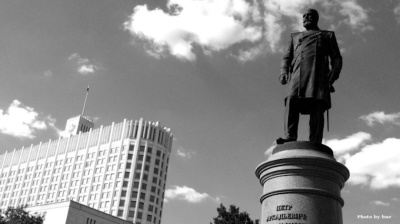 Pyotr Stolypin is famous for his reforms to Imperial Russia's agricultural sector.
By Mark Galeotti of the Institute of International Relations Prague July 25, 2017

Do the contested and confusing declaration of a new state of ‘Malorossiya’, an upsurge in fighting and the arrival of a new US envoy suggest something is moving in the Russo-Ukrainian Donbas war – or precisely that, behind all the sound and fury, it is business as usual?

The OSCE and official sources on both sides of the front line have noted a distinct upsurge in clashes, over and above the usual summertime fighting season flurry. Speaking in Kramatorsk during his first visit to Ukraine in his new capacity, US envoy Kurt Volker characterised it in stark terms: “This is not a frozen conflict, this is a hot war, and it’s an immediate crisis.”

Meanwhile, Alexander Zakharchenko, head of the self-proclaimed Donetsk People’s Republic (DPR), announced the formation of ‘Malorossiya’ or ‘Little Russia’, a name inspired by the old tsarist province that contained much of eastern Ukraine, as both a new name for the rebel-held region and also a successor to the government in Kyiv.

This rather bizarre and grandiose claim was greeted at once with suspicion from every side. Kyiv regarded it as a Russian-inspired provocation; President Petro Poroshenko placed it within a continuum of acts “from the beginning of the military aggression against my nation, [during which] the Russian Federation’s goal has been to divide Ukraine into parts”. Meanwhile Igor Plotnitsky, Zakharchenko’s counterpart in the equally-unrecognised Lugansk People’s Republic (LNR) said he had had no part in this, and the chairman of the LNR’s legislature Vladimir Degtyarenko said that “at the moment the expediency of such a step raises big doubts”.

Even Moscow seemed nonplussed. Presidential spokesman Dmitry Peskov said that “the statement Zakharchenko made this morning about Malorossiya is his personal initiative. Moscow learnt about it from the press. We stay committed to the Minsk agreements.”

Of course, it is easy to discount this as so much disinformation and disingenuity, especially as top Putin adviser Vladislav Surkov, effective “curator” of the Donbas war, expressed a degree of indulgent enthusiasm, asserting that “overall, the whole hype regarding the declaration of the state of Malorossiya is useful” because it frames the war as a civil one within Ukraine rather than – as it really is – essentially an act of Russian aggression drawing in part on local clients and proxies.

However, we should beware believing Moscow is always in the driving seat. Nationalist writer Zakhar Prilepin, one of Zakharchenko’s advisers, said “We really wanted to make a surprise for Moscow, for Washington, and, of course, for Kiev in the first place.” Surkov is notoriously too clever for his or the Kremlin’s good at times, and he may simply be making the best of the situation. His reputation is on the line, after all, as otherwise this demonstrates again the limitations of Moscow’s authority.

Poroshenko airily asserts that Zakharchenko and Plotnikov are “not political figures, but a puppet show that transmits messages received from Russia,” but this is a massive over-simplification. Any imperial power soon learns the unpalatable truth that one’s notional clients have agendas of their own, and will seek to advance them, often at the expense of their overlords.

The DNR and LNR are, of course, Russian proxy actors, armed, shielded and above all funded by Moscow. However, they are also loose coalitions of self-interested adventurers, from the leaderships down to local militia commanders.

What happens in that blighted corner of Ukraine reflects as much the struggle between these local agendas and Moscow’s as between Moscow and Kyiv. Sometimes, for example, commanders initiate combat as a money-making venture: they burn off a certain amount of ammunition and materiel, claim to have expended twice as much, and when Russia resupplies them, simply sell the excess.

In this case, Zakharchenko may have been seeking to assert his own authority over the whole of the rebel Donbas, or else trying to forestall any possible progress in the Minsk talks. One of the rebels’ nightmares, after all, is not that the Ukrainians will defeat them – although the government military has reformed at a very impressive rate, the Russians can maintain “escalation dominance” and surge in whatever is needed to hold the line – so much as that Moscow will cut a deal and abandon them. Keeping the “hot war” hot is a way of ensuring that does not happen.

This is, after all, the bitter irony of the war. Poroshenko is outspoken in his determination to regain the Donbas, even though actually pacifying, reconstructing and reintegrating the region would be a crippling drain on a Ukrainian state still engaged in a two-steps-forward-one-back reform process. Many government figures, when not in front of a TV camera, admit that for now, better Donbas not be Kyiv’s problem.

Likewise, the Kremlin never was interested in the Donbas. Instead, it triggered the conflict in 2014 because it thought this would swiftly force Kyiv to capitulate and accept Moscow’s hegemony. Since this failed, the Russians have found themselves stuck with recalcitrant bandit kingdoms dependent on support from their already-overstretched federal budget. Putin, with his mythical status as the leader who never makes mistakes, cannot pull out without some kind of “Mission Accomplished” moment, and Poroshenko neither will nor can provide him with one.

As for the West, in many ways they lost any claims to a serious role when they strong-armed Kyiv into signing the unworkable Minsk Accords, which are not only impossible to implement, they actively block any alternative process. Volker is a serious figure, but unless there is equal seriousness to address the war in Washington, his role is to be the alibi for inaction, nothing more.

So maybe one should not be surprised if the warlords of the Donbas often act according to their own agendas. Theirs is, after all, the land that at present everyone claims to defend but no one really wants.

ING: Russia balance of payments: supportive of ruble in the near-term, but risks for 2H21 mount.
5 days ago
ING: Growth in the Balkans: from zero to hero again?
11 days ago
FPRI BMB Ukraine: Most Ukrainians are optimistic about 2021 – poll
11 days ago
COMMENT: Record high debt levels will slow post-coronavirus recovery, threaten some countries' financial stability, says IIF
14 days ago
COMMENT: The Manafort Pardon: a finger in the collective eyes of Ukrainians
19 days ago