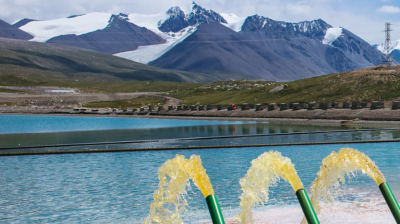 Centerra says pumping water out of the mine and treating it to remove contaminants has always been critically important to the safe operation of the mine given its proximity to glaciers. / Centerra Gold sustainability report.
By Kanat Shaku in Almaty September 2, 2021

Canadian miner Centerra Gold has warned that Kyrgyzstan’s Kumtor gold mine is at risk of potentially catastrophic events because the central pit of the mine—seized from the company by the Kyrgyz government in May—has become flooded with irregular amounts of water that have run down the pit walls.

Centerra claimed to have seen photographic evidence of the dire situation that it said now existed at the mine high up in the Tian Shan mountains near the Chinese border, but the government-appointed management responded with the claim that the water has always been there, while alleging that an effort was under way to “undermine the reputation” of the mine’s management.

Further outlining its allegations, Toronto-headquartered Centerra said that it believed at least 40 metres of water may be at the bottom of the central pit, posing a threat to both workers and the environment. It added: “This is far more water than we ever saw collect at the bottom of the pit in the more than 25 years of the mine’s operation under Centerra’s control.”

Centerra COO Dan Desjardins, who managed the Kumtor mine for five years as president of Kumtor Gold Company [KGC] until January, told Mining Weekly: “As any experienced miner would know, water in an openpit mine decreases stability and increases the risk of a wall failure. For Kumtor, pumping water out of the mine and treating it properly to remove contaminants has always been critically important to the safe operation of the mine given its proximity to glaciers. When we operated the mine, nearly all of the glacial melt water was intercepted before it reached the pit. Under the government-appointed management, this glacial water is flowing uncontrolled into the pit. This is dangerous and we are worried about the safety of workers at the mine.”

Centerra said the evidence of the flooding includes a video posted on August 15 on the KGC social media page.

Desjardins has urged the Kyrgyz administrator of the mine to rely on independent mining experts to analyse the mine’s condition and publish their findings.

Kumtor’s administrator said in a September 1 statement that the scenario as described by Centerra “doesn’t correspond with reality”.

However, in another report on the claims made by Centerra, Bloomberg cited Gavin Wendt, a senior resource analyst at MineLife, as saying that a buildup of water at Kumtor could penetrate pit slopes, causing potential contamination of nearby waterways. Wendt also noted a risk of subsidence that would be severely time-consuming and costly to tackle along with being potentially fatal for any mine workers.

“The primary issue of water residing in an operating mine is the danger presented by instability to the pit itself,” Wendt was quoted as saying. “Typically, water and mines don’t mix.”

Units of Canada's Centerra Gold on August 25 filed a motion in a US Bankruptcy Court seeking penalties of $1mn a day against the Kyrgyz government in relation to the seizure of Kumtor mine. Centerra has previously stated that it considers the seizure of the mine as unjustified and illegal, while dismissing allegations by Kyrgyzstan’s Japarov administration of corruption as false.

The company, which has posted a Kumtor “Myth vs. Fact” section on its website, said this week that it has recognised a $926mn loss on the change of control of the mine. Kumtor was included in Centerra’s discontinued operations.

The Kyrgyz government, which came to power following political upheaval in Kyrgyzstan seen late last year, is facing international arbitration hearings pursued by Centerra over ownership of the mine, the second highest gold mining operation in the world and the largest taxpayer in the country. The authorities resurrected several previously settled alleged tax and environmental complaints in relation to the gold mine prior to the seizure.

Since the takeover of the mine, Centerra’s Kyrgyz subsidiaries have filed for Chapter 11 protection. Centerra has also sued the new external manager of the mine, alleging that while he served as a director, he conspired to steal the asset from the company. The director has denied the claims.

The miner said at the time of lodging its lawsuit that KGC and Kumtor Operating Company were solvent, with total assets above $1.1bn and no external bank debts.