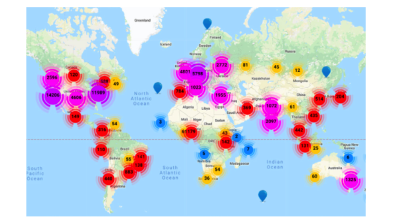 StartupBlink has just released the 2021 edition of its Startup Ecosystem Rankings Report, which encompasses 1,000 cities and 100 countries across the world / Wiki
By East West Digital News in Moscow June 29, 2021

StartupBlink has just released the 2021 edition of its Startup Ecosystem Rankings Report, which encompasses 1,000 cities and 100 countries across the world, reports East-West Digital News (EWDN).

Unsurprisingly, the US leads the country ranking, far ahead of any other country. Then come the UK, Israel, Canada, Germany and Sweden – immediately followed by China.

Ranked 7th, China has blazed its way into the top 10 global countries, with a jump of seven spots from the previous edition: “With no less than 19 cities as new entrants in this year’s top 1,000 cities ranking, China’s work in closing the gap with the top countries is astonishing,” says the StartupBlink report.

Russia is stable at the 17th place – ahead of Ireland (18th), South Korea (19th) and India (20th), but lagging behind such countries as Switzerland (8th), Netherlands (11th), France (12th), Finland (14th) and Spain (15th), as well as small but successful Baltic ecosystems (Estonia, Lithuania).

Russia features “a global tech powerhouse in motion, boosted by a massive pool of expert technical founders,” notes the report.

This goes with “massive challenges,” though: Russia is big enough for local startup founders to create substantial revenue domestically, which in turn may “reduce the motivation to look globally as part of a startup core strategy.”

What is more, “the geopolitical situation affects the ability of Russian startups to go global without facing restrictions on travel and money transfers” – which leads “high-quality founders to disconnect from Russia, setting up their operations and headquarters in other countries.”

As examples, StartupBlink cites Telegram, Google, Revolut and Ethereum founders, who were born in Russia.

In the city ranking (dominated, unsurprisingly, by San Francisco and its area), Moscow does not do badly in 9th place. The Russian capital ranks second in Europe after London – ahead of Paris (11th), Berlin (13th), Stockholm (24th), Amsterdam (29th) as well as Asian cities Tokyo (15th), Shenzhen (21st), Seoul (23rd), Singapore (25th) and large Indian cities.

According to StartupBlink, the Moscow ecosystem excels in technologies related to education (ranking 4th globally by this indicator) as well as energy and environment, marketing & sales, health and transportation.

Among the advantages offered by the city’s startup ecosystems are, according to StartupBlink:

High level of tech experts and researchers, with more than 326,000 researchers in over 800 scientific organisations alongside 200,000 students in Moscow universities;

Best-in-class Russian developers – who take 1st place in the development of algorithms aimed at solving specific applied problems, according to HackerRank;

High level of tech-optimism and willingness to try innovations amongst the population;

Major startup hubs for the startup community, including the Digital Business Hub and Skolkovo;

“Despite the pandemic, we didn’t stop our programmes for the development of the technology sector — and we will continue to actively support innovators with subsidies, consultations, new services, educational and infrastructure projects,” said Natalya Sergunina, Deputy Mayor of Moscow.

East-West Digital News heard from a source at the city government that Moscow is taking Paris and Berlin as benchmarks for ecosystem development, with a hundred performance indicators reviewed and compared on a regular basis.

There is a massive gap between Moscow and such other Russian cities as St. Petersburg (199th in the global city ranking), Novosibirsk (400th) and Kazan (428th), in spite of their efforts to support tech innovation at the local level.

StartupBlink’s algorithm analyses tens of thousands of data points. Data is coming from the company’s community of 50,000 members – including more than 50 governments, municipalities, and economic development organizations – as well as from such partners as CrunchBase, SEMrush, UNAIDS and Meetup.

The ranking is based on criteria related to the quantity, the quality and the business environment of each ecosystem at the country or city level. This year’s report features a section celebrating the cities and countries that have overperformed in different industries such as fintech, e-commerce and retail technologies, healthtech and coronavirus (COVID-19) innovation. In this section, pandemic-related projects are presented in different categories, such as potential vaccines, prevention innovations, diagnostics, treatments, grants and lifestyle adaptation.

StartupBlink’s analysis of some countries or cities may contain some bias due to variable knowledge of each ecosystem, but StartupBlink CEO Eli David told EWDN that data gaps are addressed more and more efficiently.

As an important source of data, he cites partnerships with around 65 municipalities. In addition, new types of data are regularly added, enriching the ranking algorithm. Among the novelties of this year, David cites venture investment volume per city, as well as R&D centres in each location. On the other hand, “we also remove some indicators when we feel they make less sense.”

After more than a year of development of remote work practice due to the pandemic, David highlights the importance of a startup’s physical location. “Where we base ourselves is critical. The fantasy of building high impact cloud-based startups using only zoom calls is enticing, but not practical,” he believes.

“A great startup ecosystem will expand your network, improve your ability to tap into valuable and updated knowledge, facilitate meetings with co-founders and team members, introduce you to potential investors, and above all inspire and motivate you with daily connections to like-minded entrepreneurs,” David reminds startup entrepreneurs. 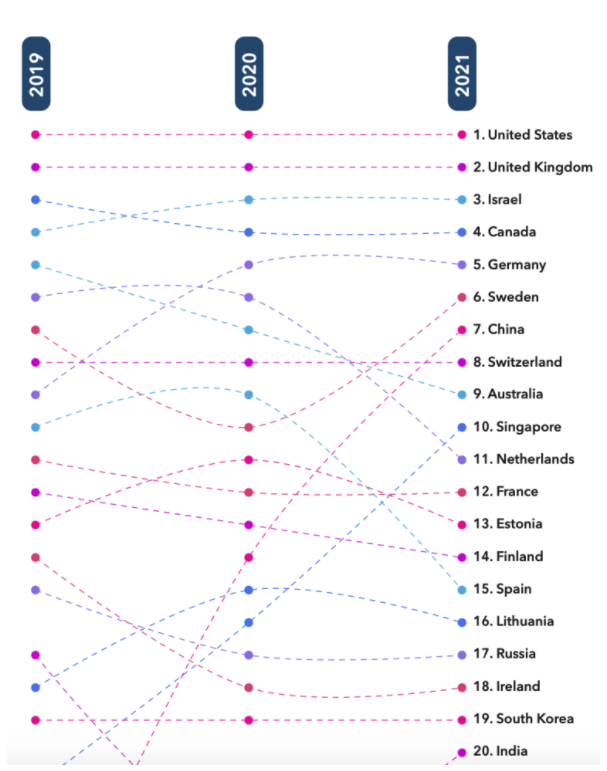