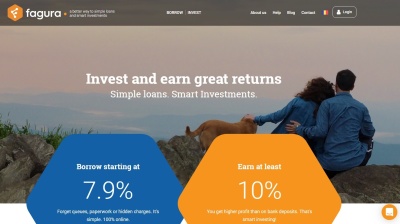 Fagura Marketplace has been launched as Moldova’s first P2P lending platform, where investors and borrowers can meet each other directly on the same platform.

The platform is a credit market based on P2P lending technology, where people looking for loans at a lower interest rate than the banking sector offers meet with investors interested in a consistent return on their deposits. Fagura is currently the first P2P lending project in Southeast Europe.

Its first investment instrument was officially launched at the debut FinTech conference in Moldova on May 17 in Chisinau, Agora.md reported.

Fagura Marketplace estimates that the investors will derive a return of about 10% on their funds, while cautioning at the same time that some of the projects might undergo delays (with the recovery of the invested money delayed consequently) or even fail. The 10% would thus be an average, and Fagura recommends investors to place their money into several separate projects.

Borrowers can expect, depending on their profile and projects, to pay interest rates as low as 7.9%. The technical platform allows detailed specifications about the type of project an investor wants to put his or her money into (number of partners, interest asked) on the one hand and detailed specifications about the size, maturity and interest a borrower would be ready to pay.

"We had a three-month test period during which we analysed 150 loan applications and we granted 36 loans out of our money. … Now that we've validated the IT platform, we're officially opening up to investors. Anyone who owns a company (legal person) in Moldova or abroad can now create a user account on the platform and invest,"said Tudor Darie, CEO Fagura, at the conference, Agora.md reported.