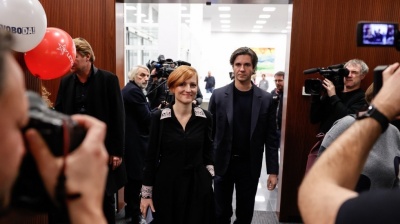 Minister of Culture Asta Vrecko and Minister of Labour, Family, Social Affairs and Equal Opportunities Luka Mesec welcomed the results of the referendum on RTV Slovenia. / gov.si
By Valentina Dimitrievska in Skopje November 27, 2022

Slovenia held a triple referendum on November 27 when citizens decided on the fate of the acts on the structure of the government, on public broadcaster RTV Slovenia and on long-term healthcare.

According to partial results released by the state election commission, all three laws that were challenged in referenda initiated by the right-wing opposition Slovenian Democratic Party (SDS) have been upheld.

Early results showed the biggest support for the RTV Slovenia law, and the lowest for the amendments to the make-up of the government.

"People have resolutely shown that they want the withdrawal of party politics from our largest media and cultural institution, which must be independent and autonomous," said Minister of Culture Asta Vrecko after the vote.

Minister of Public Administration, Sanja Ajanovic Hovnik, in her first appearance after the vote, thanked Sovenian voters who, for the fourth weekend in a row, took part in an election, RTV Slovenia reported.

“I would also like to thank all the employees of the administrative units across the country, as a third of them are at work for the fourth weekend in a row and are working to count the votes and to enforce the democratic will of the people,” she underlined.

About 1.7mn people were eligible to express their opinion on the implementation of the three laws.

However, the results of the Sunday vote will not be final, as on November 28 the results of postal voting from Slovenia will be added, and ballots from abroad will be included on December 5.

The official results of the referendums are expected to be known on January 24 at the latest.

In order to determine the quorum, the interior ministry will also prepare data on the number of voters who have died since voter list was compiled.