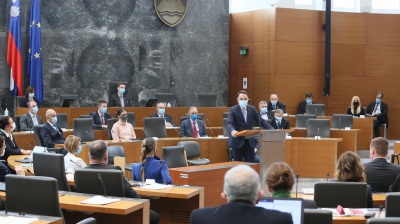 The result leaves Jansa, whose illiberal policies have been likened to those of his close ally Hungarian PM Viktor Orban, in a strong position to remain in power until the next term election in 2022 as well as emboldening him to continue with changes that have worried the opposition and civil society and caused DeSUS to quit the ruling coalition.

The no-confidence motion filed by Karl Erjavec’s DeSUS and supported by the List of Marjan Sarec (LMS), the Left, Social Democrats (SD) and the Party of Alenka Bratusek (SAB) was filed on February 10.

In a secret ballot, the no-confidence motion was supported only by 40 MPs, seven voted against and six ballots were invalid. Most of the MPs from the ruling coalition did not participate in the secret vote.

Erjavec, the opposition’s candidate to replace Jansa as prime minister, needed 46 votes to overthrow the Jansa government in the 90-seat parliament.

Before the vote, Erjavec said that MPs had an opportunity to vote for a normal and democratic Slovenia when they cast their votes in the secret ballot. He reiterated that Slovenia is not going in the right direction under the current government when it comes to basic constitutional principles, STA reported.

Erjavec accused Jansa of being an authoritarian leader, criticising him for his grip on the media and restricting human rights as well as for the failure to deal with the coronavirus epidemic.

Erjavec noted his new government's goal would be "to make Slovenia a normal state again".

Jansa told the parliament as the debate started that the initiators of the motion, a group of opposition parties known as the Constitutional Arch Coalition (KUL), were wasting taxpayers' time and money.

The failure of the motion means that Jansa cabinet will most probably last until the end of its mandate in mid-2022, said Teneo Intelligence in a note issued before the vote.

The result “could also embolden Jansa to deepen his grip on power via greater leverage over media, reduced support for civil society, and continued attacks on political opponents,” said Teneo analysts.

“Perhaps the greatest risk to democratic institutions is the proposed media financing reform, which would cut funding to the public broadcaster and the state news agency, likely at the expense of greater support for private media channels like the SDS-controlled Nova24TV. However, Jansa’s minority government has so far failed to secure parliamentary support for the controversial reform. Jansa’s populist rhetoric and illiberal intentions could attract greater international attention during Slovenia’s presidency of the Council of the European Union in the second half of 2021.”

On the sidelines of the debate, around 200 protesters, calling themselves the Friday cyclists after the series of protests on bicycles in 2020, expressed support for the change of government in front of the parliament building. With chanting and banners, they called for the fall of the government and reminded MPs they had a “last chance”.

DeSUS filed the first no-confidence motion on January 15 with the backing of 42 MPs from the four other opposition parties in the 90-seat assembly. Later the motion was withdrawn temporarily after several MPs were infected with coronavirus and therefore unable to vote in person.

Jansa was elected PM in early 2020, following the resignation of Marjan Sarec.