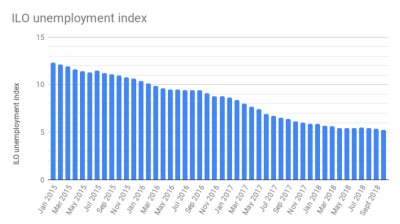 Slovakia unemployment rate down to 5.2% in October y/y
By bne IntelliNews December 10, 2018

Unemployment declined y/y in all regions, with the highest number of jobless persons in Presov region in spite of the most considerable drop of all regions, down by 12,600 persons. In other regions, the unemployment rate ranged from 2.7% in Bratislava region to 9.8% in Kosice region.

New job opportunities were created mostly in services, where the number of employed increased by 50,000 (by 3.3%), of which the biggest increases were in trade up by 26,900, accommodation and food service activities by 10,400 and in transportation and storage by 10,300 persons. Employment growth was also recorded in industry and manufacturing up by 7,400. Negative development tendencies continued in agriculture, where the number declined by 11,200 persons.

In the 3Q18, the number of job vacancies increased y/y on average by 2,345 (by 10.8%) to 24,075 posts. The largest increases were in manufacturing (by 762), public administration and social services (by 491), and in construction (by 363). Offered job vacancies decreased y/y in only six sectors, with wholesale and retail trade leading the way (by 210), the statistics show.

The Slovak Parliament approved legislation making the employment of people originating from countries outside the EU more efficient on December 7, responding to companies' complaints of a lack of labour in Slovakia.

According to the Labour, Social Affairs and the Family Minister Jan Richter (Smer-SD), the country´s economy has been growing significantly, with demand for labour exceeding supply on the domestic market. Up to mid-October, the authorities registered a total of 1,384 domestic companies with staff from countries outside the EU, of which 143 firms had employees working in jobs that were officially described as suffering from a lack of labour, the Slovak News Agency reported.