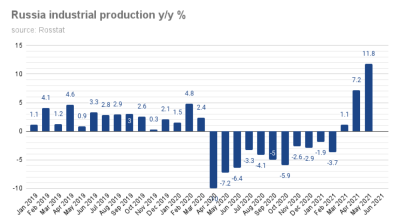 Headline industrial production grew strongly in May, up 11.8%, but digging into the details, the various sectors are posting very different results. / bne IntelliNews
By bne IntelliNews June 27, 2021

Russia’s economy has been bouncing back from the coronavirus (COVID-19) pandemic well and industrial production was up a strong 11.8% in May year on year, but drilling into the details and different sectors are recovering at very different speeds, said Bank of Finland Institute for Economies in Transition (BOFIT) in its weekly update.

“Manufacturing activity, when measured in the real volume of gross value added (GVA) produced, has been quite flat since summer 2019 and showed hardly any downward impact from the [COVID-19] recession last year. Over the longer term, manufacturing has experienced rather steady growth, with the GVA volume increasing by about 20% since 2011,” BOFIT said.

“In contrast, the GVA volume in the minerals extraction industries (including oil & gas) in the first quarter of this year was on [a] par with the 2011 level, and about 14% lower than its 2019 peak. The reduced volume largely reflects the OPEC+ agreement on production ceilings requiring cuts in Russia’s crude oil production,” BOFIT added.

Retail sales were initially hurt by the appearance of the pandemic as foot traffic to the main shopping malls collapsed. However, retail sales rapidly bounced back as the population switched en masse to shopping online. The pandemic has proved to be a significant catalyst for e-commerce and Russia’s e-commerce is booming as a result.

Transport was also hurt as supply chains collapsed, but the sector was also hit by the problems in oil and metal deliveries, where supply chains were disrupted and investment activity fell heavily during the pandemic.

“The transport and warehousing branch contracted over the past two years, a reflection of the weak performance of trade and oil production cuts that have reduced the volume of oil transmitted by pipeline. The branch’s GVA volume is still 10% less than its 2018-2019 levels and about 3% below its 2011 level, which to some extent may reflect logistical improvements in transport and distribution. While construction activity did not decline during last year’s COVID recession, the sector has not experienced growth for years. The real estate sector with its various sizeable activities, in turn, has grown steadily. It also weathered 2020 rather well,” said BOFIT.

Amongst the worst affected sectors were services as shops, cafes and restaurants were forced to close during the lockdowns in the second quarter of last year. However, once the lockdown was lifted the sector began to recover and the most recent service PMI has shown a very strong recovery in the last two months.

“Various services to firms and households, largely provided by private firms, experienced a considerable GVA volume drop as a whole during the past two years. These services have seen no sign of recovery, and their collective GVA volume remains at the 2014 level. Separately, information and communications branches, in contrast, have grown almost steadily at a fairly good pace, with only a mild dip during the COVID recession,” BOFIT said.

Banking has been a big winner from the crisis and is currently earning its highest profits in five years. Banks extended their bull run by posting $3bn of profits in May. Bank profits are being fuelled by the rebound in economic activity and the concurrent growth in corporate profits, which are also at their highest in five years. That has allowed banks to clear non-performing loans (NLPs) from their books and release capital that had been put aside as provisions for these problem loans, and was added to the bottom line.

“The financial sector has been Russia’s fastest-growing category, experiencing especially high growth in each of the past three years. Part of this growth can reflect efficiency gains from embracing digital technology. In addition, the growth in bank lending last year was accelerated by stimulus efforts on the part of the government and the central bank,” BOFIT said.

The healthcare field has long experienced growth, though it is not up by more than 15% from 2011, reports BOFIT.

“Measured in GVA volume, growth in the healthcare field came to a halt last year. This may reflect disruptions in the provision of other healthcare services due to the struggle with COVID. Developments in the education branch have been notably uneven, with an overall decline for nearly three years. Thus the branch’s activity measured in GVA volume is slightly lower than in 2011,” concluded BOFIT.