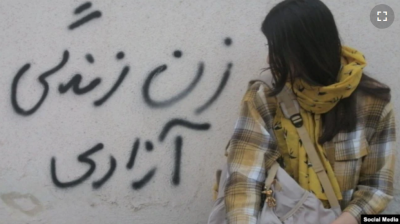 A young Iranian woman sits by a wall with the slogan adopted by the protesters in Iran, "Women, Life, Freedom." / bne IntelliNews
By bne IntelIiNews November 2, 2022

One video dated October 22 showed a dozen riot police beating a man at night on a Tehran street. One officer on a motorbike then runs him over, then another shoots him at close range. Neither Reuters, which pointed to the video, nor bne IntelliNews, could verify the authenticity of the footage.

"This shocking video sent from Tehran today is another horrific reminder that the cruelty of Iran's security forces knows no bounds," Amnesty International said on Twitter about the video, also reported by RFE/RL.

Anger is mounting in Iran at the widening crackdown on the protests. Prominent figures including rappers, economists, doctors, academics and lawyers have been arrested. It is also thought around 300 journalists have been detained.

The Guardian on November 2 told the story of how the parents of an Iranian woman, who died six days after being shot while filming protests in her home town, have allegedly been subjected to a sustained harassment campaign by security forces.

CNN interviewed a historian—Abbas Milani, director of Iranian studies at Stanford University—who said the Iranian regime knows it’s sitting on top of a volcano and that the protests may erupt into something that the powers that be cannot control.

Also on November 2, Iranian Supreme Leader Ayatollah Ali Khamenei said that US officials who support the protests are "shameless".

"Those who think the US is an untouchable power are wrong. It is completely vulnerable as seen with current events," Khamenei also remarked, according to Iranian state media.

Putting more pressure on the authorities, Iranian university students forged ahead with sit-down strikes on November 2 in support of of the protests, ignoring harsh warnings by security forces.

It was, meanwhile, reported by Shargh newspaper on November 2 that 85-year-old genetics researcher Professor Dariush Farhoud, who lately criticised the Islamic regime, had been released from custody and was in good health.

The octogenarian, regarded as a national treasure, said he was abducted from outside his home and told to get into the car of security agents, prior to being transferred to an unknown facility for 26 hours of interrogation.

Farhoud said: “On Sunday, Aban 8 [October 30] at 5:55 a.m., I was leaving home. Two people who were wearing black clothes and looked like agents greeted me very warmly and got into my car. Then they took me to a place where they put me in another car.

“I was at their service for about 26 hours. They asked and answered very respectfully. I didn't know until the last moment whether this story would end well.”

Farhoud added: “They wanted to know if I have a relation to someone [that have led to my criticisms] or if the problems I raise are teacher problems. Maybe they thought I was inspired from somewhere.”

Prior to his detention, the renowned scientist criticised the Islamic Republic system for violating women’s rights.

Shargh’s report said that Farhoud had returned to his research centre to continue with his work.

The newspaper, which continues to break news on ongoing developments with the protests in Iran, more than a month ago had one of its journalists, Niloufar Hamid, arrested and thrown into jail.

"Niloufar has been in jail for more than a month. Saturday, October 29 was her birthday, and we hope that she and all other journalists in jail return to their newspapers soon," Shargh wrote.