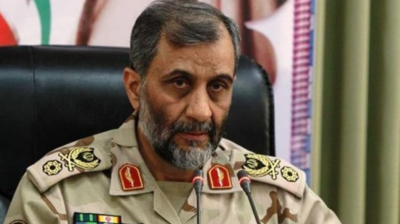 Qasem Rezaei, Deputy Commander of the Law Enforcement Force of the Islamic Republic of Iran (NAJA),
By bne IntelIiNews September 28, 2020

An Iranian deputy law enforcement commander on September 28 warned Armenia and Azerbaijan to stop hostilities near their borders with Iran after three artillery shells landed on Iranian territory.

The ongoing clashes between Azerbaijan and Armenia centred on the Nagorno-Karabakh enclave are happening much closer to the Iranian border than the flare-up in July which was further up the Line of Contact between the two countries near Georgia. The interrelated nature of the border areas spread between Armenia, Azerbaijan and Iran represents a potential powder keg as inhabitants include a 300,000-strong Armenian-Iranian minority and there are more than 12mn ethnic Azerbaijani people living in the Islamic Republic. In a hypothetical scenario, some ethnic Azerbaijanis could cross the border to support their ethnic brethren.

Qasem Rezaei, Deputy Commander of the Law Enforcement Force of the Islamic Republic of Iran (NAJA), warned Iran’s two northern neighbours that their battle was spilling over on to Iranian territories after the reports of mortar shells landing on Iranian land and the discovery by Iranians of bullets from the fighting.

Rezaei said: “One serious demand from us as a neighbour of both countries is for them to resolve their issues through dialogue.”

He added: “We have been monitoring the situation since I sent a warning to border officials on both sides. We caution that no bullets should be exchanged on our soil. There was also a mistake with three mortar shells near our border, which we warned [the adversaries about], and I hope things will calm down.”

The warnings, however, may be falling on deaf ears. New reports suggested that three more artillery shells had since fallen in the flat Parsabad area between Iran and Azerbaijan, which is separated by the Aras River.

Tehran professes impartiality towards the two foes but Baku has demanded Iran stop allowing Russian supplies to Armenia pass through its airspace.

In the latest flight from Rostov-on-Don in southern Russia to Yerevan, which avoided both Georgian and Azerbaijani airspace, an Antonov An-124 supply plane went through airspace of Kazakhstan, Turkmenistan and Iran before heading to Armenia on September 28.

Azerbaijan said on December 3 that it lost nearly 2,800 soldiers in the 44-day Nagorno-Karabakh war with Armenia that concluded in early November. It was the first time that Baku had disclosed its ... more

Internet connectivity has become a problem for the parts of the Nagorno-Karabakh enclave still held by ethnic Armenians because the main internet line running from Vardenis to Stepanakert passes ... more

Azerbaijan has started the construction of a four-lane bypass to the mountain fortress city of Shusha, liberated from ethnic Armenians during the recently concluded six-week Nagorno-Karabakh ... more