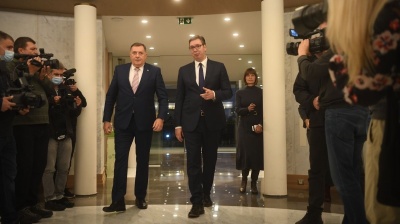 Peace has no price, the Serb member of Bosnia & Herzegovina's tripartite presidency Milorad Dodik said after his meeting with Serbian President Aleksandar Vucic in Belgrade on October 23, taking a conciliatory tone in contrast to his recent rhetoric.

The meeting between Dodik and Vucic was organised after rising tensions in Bosnia following Dodik's announcement that Serbs would withdraw from joint state-level institutions.

After weeks during which Dodik increasingly employed rhetoric that alarmed both local Bosniaks and Croats, and the international community, there now appears to be a will to calm the situation.

After the meeting, Dodik said that peace in the country “has no price” and that he is not ready to sacrifice peace for Bosnia’s Serb entity Republika Srpska.

“What matters to me is Dodik’s message that, if problems are solved, he is ready to talk and have the institutions function uninterruptedly,” said Vucic, adding that sanctions would only heat up the atmosphere and lead to a domino effect.

“I am grateful that [Dodik] expressed his willingness to listen to other opinions. It is important to preserve peace and show that Republika Srpska is not the source of the problem, but that we are all ready to talk in the region. Our position is clear and firm. I will not say that we warn, but I ask everyone to talk and solve problems through dialogue. Serbia will not join the sanctions. While I am president, there will be no blockades on the Drina,” Vucic commented.

US Deputy Assistant Secretary of State Gabriel Escobar warned Dodik on September 30 that his continued secessionist threats were unacceptable to the US because they directly threaten the Dayton Accords and could only lead to the complete isolation of Bosnian Serbs and Republika Srpska.

Dodik said on October 8 that Republika Srpska will withdraw its representatives from the joint armed forces, then from the top judicial body and the tax administration.

He reiterated the threat on October 14, and also warned that if  sanctions are imposed Republika Srpska will declare its independence from Bosnia.

Prosecutors in Bosnia responded by launching an investigation into Dodik for “undermining the constitutional order”.

Mirko Sarovic, president of the Serb Democratic Party (SDS), the largest and strongest opposition party in Republika Srpska, said that it was obvious that Dodik had been clearly told that unilateral decisions were out of the question.

“It is precisely the search for a solution through conversation and reasonable politics that we, as the SDS, have always emphasised as the only possible solution,” said Sarovic.

He pointed out that Vucic said that he had heard Dodik's “rational and pragmatic approach”, and that “if an agreement is reached on forests and land, Bosnian institutions will continue to function”.

Dodik objects to the February 2020 decision of the Bosnian Constitutional Court that all agricultural land in Republika Srpska is considered the property of Bosnia, and not of the entity.

Local media also reported that Bakir Izetbegovic, the leader of the largest Bosniak political party, will soon go to Serbia to talk to Vucic.