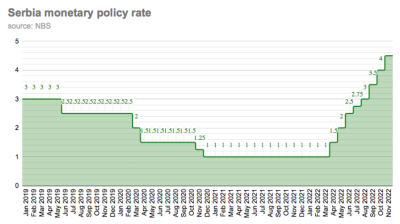 The Serbian central bank raised the key policy rate by 50 bp to 4.5% at a rate-setting meeting on November 10 (chart). The deposit and lending facility rates by the same amount, to 3.5% and 5.5%, respectively.

The National Bank of Serbia (NBS) executive board made the decision amid a continued rise in cost-push pressures and inflation, reflecting primarily import price growth, the bank said in a statement.

This was the eighth consecutive rate increase by the NBS, which has raised the key rate by a total of 350 bp.

The NBS said its decision was made as global inflationary pressures are “stronger and more durable” than initially expected.

With the rate hike it aims to help limit “the second-round effects of rising prices through inflation expectations and will ensure that inflation strikes a downward path and returns with the bounds of the target tolerance band until the end of the projection horizon”.

"Inflation in the euro area, our key trade partner, is the highest since the block’s inception, and its return within the target band is not expected before late 2024,” the statement said.

“High inflation is largely the consequence of soaring energy and food prices, while inflationary pressures in some countries are also generated by domestic demand and labour market factors. In such an environment, over the past months many central banks have been tightening their monetary policies at a more robust than expected pace, revising up their inflation projections and expectations concerning the level and timing of peak inflation.”

Serbia’s annual inflation rate reached 14% in September, according to the latest data from the state statistics office.

Core inflation, which reached 8.6% year on year in September, has also been rising in the past months on the back of higher imported inflation, though it remains considerably lower than headline inflation.

The NBS noted the slowdown in the economy in the third quarter, when annual GDP growth is estimated to come in at 1.1% y/y, down from 4.1% y/y n Q2.

“[The] economic slowdown was sharper than expected, mostly reflecting this year’s drought and an agricultural season considerably underperforming the assumptions, the reduced external demand and a further rise in production costs, translating primarily into lower construction and manufacturing output. Also, due to the low water levels, the energy sector contracted further,” the NBS said.

The NBS’ next rate-setting meeting will be held on December 8. Future decisions will be based on the global geopolitical situation and movement of key monetary and macroeconomic factors in the domestic and international environment.

Hungary’s GDP growth slows to 4.0% in Q3
22 hours ago
Poll shows only one in five Moldovans happy with their government
23 hours ago
Montenegro’s tourist arrivals almost double y/y in October
23 hours ago
LNG in Europe: ready or not?
23 hours ago
Russia’s GDP at 4.4% decline in October, construction and agro stick out
23 hours ago