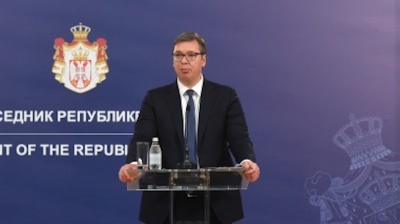 Vucic has long pursued a multi-vector foreign policy, pursuing EU accession while maintaining friendly relations with Russia, China and the US. However, as an EU accession candidate in recent days Belgrade has been under heavy pressure to join international sanctions imposed on Russia after its unprovoked invasion of Ukraine. This proved to be insufficient, though, for Serbia to turn its back on its old ally.

The statement issued by the presidency on the evening of February 25 stressed Serbia’s respect for “the principles of territorial integrity and political independence of states” and said that the “Republic of Serbia considers it very wrong to violate the territorial integrity of any country, including Ukraine.”

“The Republic of Serbia sincerely regrets everything that is happening in Eastern Europe. Russia and Ukraine have always been friendly states for the Republic of Serbia, and the Serbian people consider Russians and Ukrainians to be brotherly nations. We perceive the loss of every human life in Ukraine as a real tragedy,” the statement said.

However, Vucic recalled Serbia’s own experience of western sanctions – during the wars of the 1990s – and “aggression” from Nato members, and pointed to Russia’s support for Serbia during that time. He also pointed to Russia’s consistent support for Serbia by refusing to recognise the independence of Kosovo, which unilaterally declared its independence from Serbia in 2008.

“[Russia was] the only country that did not impose sanctions against us in the 1990s," Vucic said in an address to the nation.

"They also supported our territorial integrity in the United Nations. We must not forget that,” he added.

The statement later issued by the presidency elaborates: “the Republic of Serbia shall, when considering the need for possible restrictive measures or sanctions against any state, including the Russian Federation, be guided solely by the protection of its citizens' vital economic and political interests. As a country that has experienced Western sanctions in the recent past and whose compatriots in Republika Srpska are suffering sanctions today, the Republic of Serbia believes that it is not in its vital political and economic interest to impose sanctions on any country, including its representatives or economic entities.”

The timing of the EU’s decision to impose sanctions on Russia, and pressure from western countries for Serbia to join, has come at a difficult time for Vucic and the ruling Serbian Progressive Party (SNS), which are both seeking re-election in April. Given their historic and cultural links, as well as Russian support over Kosovo, a decisive move against Moscow would be difficult for many Serbs to stomach, and likely to damage the ruling party at the upcoming polls.

As well as declining to join the sanctions, the statement reiterates Serbia’s military neutrality and says the army and interior ministry will quit all joint exercises with foreign parties until further notice.

“The Republic of Serbia, of course, will provide all kinds of humanitarian aid to the endangered people and population of Ukraine,” the statement added.

The presidency statement also touched on practical issues, saying: “Competent state bodies will …  take all measures to ensure that citizens and the economy are supplied with the necessary amount of energy, oil and oil derivatives, gas, but also food and other necessities for a decent and dignified life.”

Serbia imports almost all its natural gas from Russia, and is due to sign a new long-term contract later this year.

BREAKING: Putin signs off annexation of four Ukrainian regions
2 hours ago
Kremlin preparing for a protracted conflict by putting Russian economy onto a war footing
7 hours ago
Hungary’s forint slides to new low after central bank ends tightening cycle
9 hours ago
Slovak ministers criticise Czech border controls
9 hours ago
Might Trussonomics be a branch of Erdoganomics?
15 hours ago