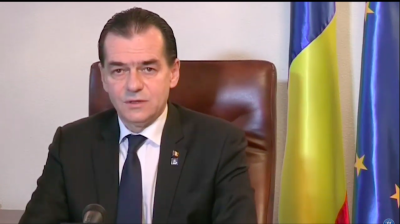 Romania’s parliament voted in the government led by Prime Minister Ludovic Orban on March 14, one day after President Klaus Iohannis designated Orban to lead a new cabinet. The government members were sworn in on the same day at Cotroceni Palace.

Putting aside their political differences, all parties agreed that the executive needs full power to mitigate the effects of the Covid-19 epidemic.

This sets the ground for political stability after months of political turmoil were triggered by the National Liberal Party (PNL) overthrowing the Social Democratic Party (PSD) cabinet of PM Viorica Dancila in October.

It was replaced by a new government led by Orban, that in turn was dismissed in a confidence vote in February. Since then Orban has led an interim government with only limited powers.

Iohannis and the PNL had been pushing for early elections, a scenario that looks unrealistic now, after a couple of decisions made by the Constitutional Court.

Ironically, the new Liberal cabinet led by Orban, which is the same as the one dismissed by the opposition last month, was endorsed with the votes of the Social Democrats — and not the Liberals, as many of the party’s MPs including Orban have self-quarantined after contact with an MP who has tested positive for the virus.

Out of the 286 votes for the new cabinet of PM Orban, only 42 votes came from PNL lawmakers (out of 111 PNL lawmakers), as most of the Liberal lawmakers were absent.

Bucharest to declare state of emergency

Romania’s presidency announced that the country will enter a state of emergency at the beginning of the week, starting March 16, to allow the new government to better manage the coronavirus crisis.

Comprehensive measures have been set in place already, including a ban on the entry of foreign nationals and 14-day self-quarantine for Romanians coming from virtually any country.

But the specific measures to be enforced under the state of emergency were not disclosed yet.

“There will be no tanks on the streets,” Orban stated, adding that prices of some key goods might be capped. The government will need to requisition some dwellings for organising quarantine areas. The export of some medicines has already been banned. Only the necessary measures will be taken, Orban assured citizens.

Romanians coming from the so-called “red zone” that currently includes China’s Hubei province and most affected regions in South Korea, France, Spain and Italy, are placed under organised quarantine at their point of entry to Romanian territory.

As of March 16, there were 139 infected people on Romanian territory, but numbers are expected to rise.

The government has already prepared a package of measures amounting to “at least 1% of GDP”, to mitigate the negative impact of the Covid-19 pandemic on the local economy, Finance Minister Florin Citu announced on Saturday immediately after being sworn in for a new mandate.

The package was announced in relation to the European Commission estimating the union’s GDP would decrease by 1% this year and the region would fall into recession as compared to 1.2% growth projected before the Covid-19 pandemic.

The European Commission has already announced that the expenditures related to the Covid-19 crisis, including stimulus packages, will be treated separately and not included in the public deficit subject to the 3%-of-GDP limit.

This is particularly important for Romania, which posted a 4.6%-of-GDP public deficit last year and did not expect, before the Covid-19 crisis, to compress it to less than 3.6% this year.

Citu also said that the government is working on a significant fiscal package to help small and medium sized enterprises (SMEs). The measures will be endorsed in the first government meeting after the government was sworn in.

In regard to bank loan instalments, the finance minister said the central bank (BNR) is discussing with commercial banks similar measures of deferring the deadlines but it was not decided yet whether all debtors or only those who are under quarantine, will receive such breaks. The government suggested banks could give a two to three month grace period to their debtors as well.

Banks in Romania have reached an agreement to extend allowances to their debtors in the context of the Covid-19 epidemic, Adrian Vasilescu, an advisor to the BNR governor announced, adding that each bank will notify its customers of the decision. However, each bank will decide what category of debtors will be allowed to defer their payments and for how long.