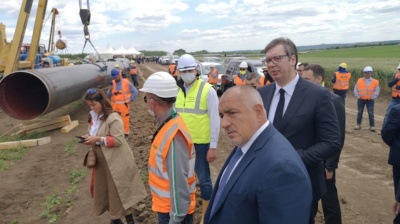 Bulgaria’s President Rumen Radev and former prime minister Boyko Borissov were informed that the construction of the TurkStream stretch in the country, dubbed Balkan Stream, would not be in the country’s interest and was intended to cut Ukraine out of the export route for Russian gas, investigative news outlet Bird.bg reported, quoting a secret report from the national security agency, DANS, from 2017.

Bulgaria paid more than BGN3bn (€1.5bn) for the stretch of the pipeline that runs through the country, but has not benefitted in any way, simply serving as a transit country for gas deliveries to Serbia, Greece and North Macedonia.

The pipeline was built under Borissov’s third government and was dubbed Balkan Stream by Borissov in order to avoid US sanctions. It is a continuation of the TurkStream pipeline that runs from Russia under the Black Sea to Turkey. It has a capacity of 31.5bn cubic metres (bcm) of gas per year, part of which is earmarked for several Southeast European countries.

Borissov and Radev have been accused in the last few days of being aware that Moscow aimed to cut Ukraine out of its gas export route to allow an invasion to go ahead without disrupting gas exports. Neither has responded to the accusations.

Although built by Bulgaria with state funds, the pipeline has never supplied natural gas to the country, which was only transiting it to Serbia.

Until the end of April this year, Bulgaria had been importing almost all of the gas it needed from Russian Gazprom through a different route, usint the pipeline network of state-owned Bulgartransgaz. However, Moscow ended the supplies after Sofia refused to start paying in roubles.

The secret DANS report, also sent to the then parliament speaker Tsveta Karayancheva, made it clear that the pipeline would not supply Bulgaria with natural gas and that its main goal was to bypass Ukraine.

“The projected value of the project is BGN2.5bn-BGN3bn and, according to the data, the Russian side insists that it must be completed by 2020 with the aim of possible cancellation of the transport via Ukraine,” the first DANS report issued in October 2017 reads.

Bulgaria built the pipeline at its own expense and Borissov repeatedly claimed the project was of strategic importance for Bulgaria as it would contribute to the diversification of natural gas suppliers in the country.

A second report by DANS, issued in December 2017, confirmed that Bulgaria would not receive any gas from the pipeline. The national security body wrote it had received information from Russia that Gazprom had changed the parameters of the planned transport from 19.9 bcm to 15.75 bcm annually.

“This quantity corresponds to the capacity of the pipeline and the proposal of the Russian side is that the full volume is being transited through Bulgaria to Serbia, Greece and [North] Macedonia, i.e. no quantity for the internal [Bulgarian] market was planned,” DANS wrote.

“The Russian side has not provided an explanation for the change of the conditions. But the hypothesis that Turkish operator Botas requested guarantees that the quantities provided via the first pipeline will be intended only for Turkey should be excluded,” DANS added.

Despite having seen the reports, in July 2020 Borissov claimed that the pipeline would deliver natural gas to Bulgaria “from different sources — the US, Russia, Azerbaijan, Qatar, Saudi Arabia”.

Radev — who in general was a fierce critic of Borissov — never challenged this claim or publicly questioned the project.

After the publication of Bird.bg’s investigation, reformist Democratic Bulgaria said that it will ask the parliament to set up a committee to investigate the actions of Borissov, Radev and Karayancheva regarding the construction of the pipeline.

The news broke just days before Bulgaria’s snap general election on October 2, in which Borissov’s Gerb party is expected to take the largest share of the vote, though not take enough parliament seats to form a government.

COMMENT: The new Cold War will be different, and not only because of China
National hero commemoration puts North Macedonia’s police on high alert
EU and G7 agree on Russian petroleum product price caps