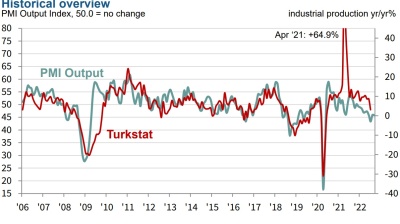 The headline manufacturing purchasing managers’ index (PMI) for Turkey fell to 46.9 in September, down from 47.4 in August, marking the seventh month in a row it has been below the 50.0 mark that divides expansion from contraction.

“The sustained slowdown in new work has had an impact on employment, with firms scaling back workforces for the first time since the initial wave of the pandemic. With manufacturers sitting on increasingly large finished goods inventories, the prospects for production over the coming months appear bleak."

The survey data showed output, new orders and purchasing activity all moderating in September. Easing workloads meant that firms scaled back employment, ending a period of job creation which began in June 2020.

S&P said in a commentary on the latest PMI findings: “Anecdotal evidence suggested that fragile demand conditions and inflationary pressures were the main factors leading to slowdowns of both output and new orders during September.

“Total new business has now moderated on a monthly basis throughout the past year, with output slowing for the tenth month running. New export orders also softened, with Europe cited as a particular source of demand weakness.”

“In fact, the fifth consecutive monthly increase in post-production inventories was the sharpest since February 2012,” noted S&P.