Russian Railways and Gazprom may build most ambitious ever Arctic railway 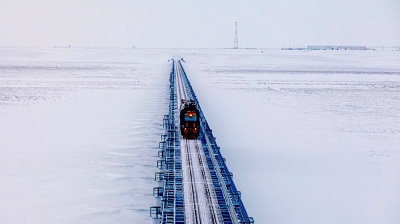 Russia is mulling a new $2bn artic railway link to the port of Sabatta
By bne IntelliNews October 29, 2018

Russian Railways (RZD) and state-owned gas monopolist Gazprom could take on building what has been dubbed “the most ambitious railway project ever,” a train line that cuts through the icy northern territories to Arctic port of Sabetta, Vedomosti daily reported on October 29 citing unnamed federal officials.

As the share of the Arctic in Russian GDP reaches 10%, the government is considering re-launching Russia's most northern railway project that will cost almost $2bn, with the help of Gazprom and RZD. Negotiations are also being held with second-largest gas producer Novatek.

Currently the Sabetta railway project is not included in the federal infrastructure investment plan and the issue of receiving federal funding is key, sources in the Ministry of Transportation told the daily.

The railways would help deliveries to extraction projects in the Yamal and Gydan peninsulas, which will see RUB7 trillion of investment by 2035, as well as to facilitate loading the Northern Sea Route. The cost of the railway is estimate at about RUB115bn ($1.75bn) at 8mn-10mn tonnes annual throughput capacity.

Gazprom previously participated in the construction of Obskaya-Bovanenkovo-Karskaya railway in the Arctic, but its plans to sell the RUB130bn project to RZD failed, Vedomosti reminds. Analysts surveyed by the daily estimate that Gazprom loses RUB5.8bn annually on amortisation and operational costs of the railway alone.

Under the new plan, previously constructed Arctic railway would be bought out from Gazprom by the private-state partnership to build its continuation to Sabetta. Gazprom could thus benefit both from disposing of a loss making asset, and from gaining access to Northern Sea Route.

At the same time Novatek should be less interested in the deal. The company already operates from Sabetta and ships liquefied gas from its Yamal LNG plant in sea tankers, and has no need in additional railway transportation channel. "The company would have to finance a RUB100bn railway to be used by Gazprom to deliver construction materials to Yamal and its LNG to Sabetta," sources said.

However, Novatek's rapid LNG expansion "would not be possible from state support," Fitch Ratings analyst Dmitri Marinchenko reminded Vedomosti, noting that it could be difficult for the company to avoid participating in a strategic federal project. 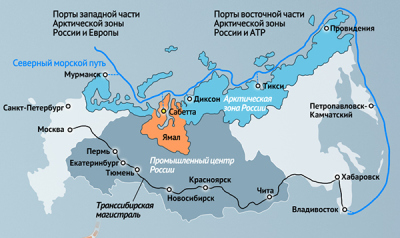