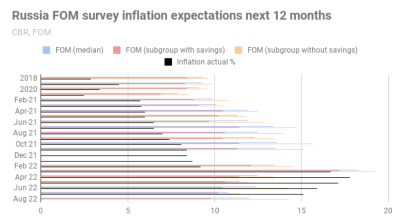 Russians' inflation expectations for the next year ticked up to 12% in August, but they are still below the actual rate of 15.1%, as the CBR remains firmly in control of prices. / bne IntelliNews
By bne IntelliNews August 31, 2022

The population’s expectations for inflation rose in August to 12% on average from 10.8% a month earlier in the coming 12 months against the actual rate of 15.1% recorded in July.

Inflation expectations peaked at 13.5% in February shortly after the war in Ukraine started and had been falling steadily as Russia’s economy rapidly stabilised, but have ticked up in the last month as the summer comes to an end. (chart)

“In August 2022, although the estimates of inflation observed by households decreased, their inflation expectations for a year ahead rose to the upper bound of the April-July range, as shown by FOM’s survey,” the CBR said in a note. “The median estimate of inflation expected in the next 12 months reached 12.0%, which is the same as in summer 2021. Contrastingly, companies’ short-term price expectations continued to trend downwards, returning to the levels of mid-2020. Analysts’ inflation forecasts for 2022-2024 also lowered significantly. The Bank of Russia forecasts that given the monetary policy pursued, annual inflation will edge down to 12-15% in 2022, 5-7% in 2023 and return to its 4% target in 2024.”

Inflation expectations are an important indicator, since if the public expects prices to go up then that is in itself inflationary. The Central Bank of Russia (CBR) works hard to manage the public’s expectations and fostered its reputation for being able manage these expectations, as the more confidence there is in the central bank then the easier it becomes to manage inflation.

Before the war and in the face of strong price growth caused by the pandemic, CBR Governor Elvira Nabiullina became worried that inflation expectations would become “unanchored” and the central bank would lose the ability to control inflation as panic buying increases demand and starts to drive prices up on its own.

Nabiullina ended almost seven years of rate cuts in May 2021 and began to aggressively hike interest rates again and then doubled rates to 20% shortly after the war in Ukraine began at the end of February. The deep devaluation of the ruble should have driven inflation higher, but Nabiullina’s fast action and the tight currency controls she imposed in parallel nipped the surge in inflation in the bud and she has been able to cut rates four times since then to the current 8% – below pre-war levels. (chart)

Now, some worry that Russia is facing the opposite problem. If the expectation is that prices will fall in the future consumers put off purchasing decisions, reducing demand and so the expectation of falling prices becomes a self-fulfilling prophecy and the country can get trapped in a deflationary spiral that can take years to get out of.

Currently the median expectation for inflation amongst the population over the next 12 months is for prices to rise by 12%, below the current actual inflation level of 15.1%, which itself has reduced from 17.8% in April. (chart)

The CBR’s monthly FOM survey also found that the expectation of Russians with savings was an even lower 9.8% and those Russians with no savings expect prices to rise 14.3% over the next year, close to the actual rate of inflation.

However, other economists point to the fact that Russia always suffers from mild deflation during the summer as the harvest comes in, driving down food prices as well as the output from dacha gardens in the warm weather, which contributes to the downward pressure on prices. As the weather cools then prices usually rise again.

The CBR is currently predicting that inflation will end this year at 13.9% before falling to 5.1% in 2023. Those predictions are close to the professional economist estimates at Interfax and Reuters that predict inflation will end this year at 13.6% and 13.4% respectively. All participants in the FOM survey – both the panellists and the professionals – have revised their estimates for year-end inflation down continuously since a peak following the start of the war.