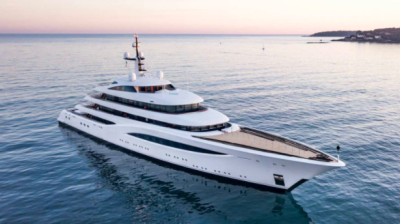 Authorities have seized Russian planes and super-yachts belonging to oligarchs as the sanctions noose tightens around Russia.

Private Russian airline S7 cancelled all its international flights after one of its jets was seized on March 3 in Armenia in connection with western sanctions.

Hundreds of Irish-owned planes leased by Russian companies will also be ordered to be returned to their Irish owners within days in a move that could ground a large share of the Russian fleet, reports Ireland’s Independent.

A day before, France and Germany seized two luxury yachts belonging to Russian oligarchs, according to reports from the French authorities and Forbes magazine.

At least five other super-yachts owned by Russian billionaires are anchored or cruising in the Maldives, out of the reach of Western authorities. The yachts arrived in the Maldives after the West imposed sanctions on Russia.

The EU has already closed almost all its airspace to Russian aviation since the main hammer blow of unsuspectedly tough sanctions was announced in response to Russia’s attack on Ukraine on February 24.

While Russia has a long established plane-making production industry, the majority of Russia’s airlines, both privately owned and state-owned, have chosen to use foreign made planes, the bulk of which are on lease deals.

Aircraft lessors have taken the unprecedented step of recovering tens of billions of euros worth of aircraft and have given their operators between a few days and a month to return them.

Irish leasing companies are expected to terminate all leasing deals with Russian aircraft in the coming days, the Independent reports, as the next phase of sanctions ratchets up pressure on the Kremlin.

Russia has already suggested that it might nationalise the aircraft if leasing companies follow through on their threat. And Russia may retaliate by closing its own airspace to western aviation, as flying over Russia is the shortest route between Europe and Asia. While making Russian airspace off-limits to western airlines would considerably increase both travel times and the cost of plane tickets, Russia’s state-owned national carrier Aeroflot would forgo tens of millions of dollars in transit fees it currently earns from the route.

The most bizarre of all the problems super-yacht owners have been facing was experienced by Alexander Mijeev, CEO of the state-owned Russian military weapons company Rosoboronexport and owner of the 156-meter Lady Anastasia yacht moored in Monaco. A Ukrainian sailor, Taras Ostapchuk, who has been working on the yacht for a decade as a mechanic, tried to scuttle the $7.7mn yacht in retaliation for Russia’s attack on his homeland and the fact that Rosoboronexport is a major supplier of weapons.