Russian IPO wave on the way 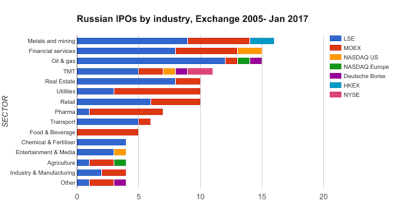 ​A wave of Russian IPO could be gathering momentum out to sea after iconic toy store Detsky Mir placed its €333mn IPO earlier this month. Russia’s equity market has come back to life with about $1.9bn worth of securities issued in just the last three months.

Detsky Mir (Children’s World) closed the country’s second-largest IPO in three years on February 8, selling one third of its shares for RUB21.1bn on Russia’s Moscow Exchange (Moex). The IPO values the company, which specialises in toys and children’s goods, at RUB62.8bn (€991mn), also making this the biggest IPO in the Europe, Middle East and Africa (EMEA) region so far this year.

The biggest previous IPO was of Russneft, a second-tier oil company that belongs to the Gutseriev family, was half the size and also on Moscow Exchange (MOEX). The Gutserievs have built up a multi-billion business by targeting and developing oil fields that were too small to interest Russia’s oil behemoths. Russneft raised RUB32.4bn in November 2016 by selling off 20% of its shares on the exchange.

The market was booming in the noughties when the number if IPOs rose steadily to a peak of 32 in 2007 almost evenly split between the LSE and MOEX (plus a smattering of issues on NASDAQ and the Deutsche Borse), but tumbled to a mere six issuances, almost all on MOEX, in 2008 as the international crisis started.

“There is a huge backlog of companies that want to IPO and if the market conditions change then there will be a wave of issuances,” says Chris Weafer, CEO of Macro Advisory.

Since the start of 2010, a total of 267 companies announced IPO plans, according to PBN Hill + Knowlton, of which 45 have actually happened, 12 were cancelled and another 210 are still pending.

Indeed, the group that doesn’t seem to be in a rush to capitalise on the improving sentiment amongst portfolio investors is the government, which recently delayed pretty much all of its headline privatisations for this year other than shipping company Sovcomflot.