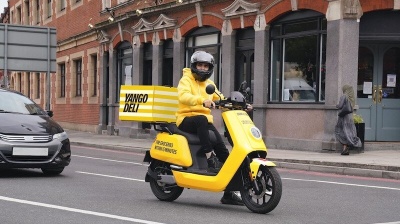 Russian tech giant Yandex has announced that its e-grocery service began operations in London this morning. After successful launches in Tel-Aviv and Paris, this is the next step in Yango's international expansion.
By bne IntelIiNews October 15, 2021

The service already works with customers in Russia, France and Israel and has now added four dark stores in the UK capital that will cater to an 1.4mn potential customers, the company said.

Russian tech giant Yandex has announced that its ultrafast grocery deliver arm has begun operations in Bethnal Green, Battersea, Bermondsey and Acton, bringing everything from groceries and freshly baked pastries to houseware and personal care products direct to customers’ doorsteps. The company will also pilot the delivery of hot food, which it claims is a first for London’s ultrafast grocery sector. Over the coming months Yango plans to expand its service to cover other areas of London too.

The international expansion is a daring move from Yango, which hopes that its experience in setting up networks (Yandex’s grocery delivery brand has 400 stores worldwide) and the support of a top tech company will give it the edge over new startups still seeking investment.

Evgeny Chernikov, general manager at Yango Deli UK, said “Our operations are tried and tested on a large scale and across multiple geographies, and we’re now excited to bring a new level of ultrafast grocery service to the UK’s bustling capital.”

London is well suited to the sector. It is densely populated, relatively wealthy, and full of young professionals who embrace tech solutions and have little time to spare. “Whether Londoners need to order a last-minute essential ingredient for a dinner recipe, fresh baked goods, or a flat white caffeine boost to start the day, Yango Deli is expertly configured to save precious time,” said Chernikov.

Ultrafast grocery companies deliver goods from hyperlocal warehouses located in residential areas, called dark stores. Each dark store has a complex logistics process based on stock keeping units (essentially barcodes) that allows each order to be put together in 2-3 minutes. Orders are then shipped off to customers on electric motorcycles or electric bicycles. The service will be available every day from seven o’clock in the morning until eleven in the evening, with no delivery fee or minimum order requirement.

Yandex’s model is designed to reduce waste, with an automated purchasing system driven by a self-learning algorithm, so that customer demand each day can be anticipated and the appropriate stocks ordered.

Maxim Avtukhov, head of international markets for Yango Deli, said: “We benefit from our own tech solutions, which facilitate our intelligent supply and demand planning, predictive assortment selection and effective picking and delivery routing.”

NASDAQ-listed internet giant Yandex started in 1997 as a search engine. It is now the fifth-biggest search engine in the world. The company also offers over 70 internet-related products, from ride hailing and music streaming to e-commerce.

Yandex first launched its ultrafast grocery delivery operations in Russia in 2019. It benefitted from rapid digital uptake (which was accelerated by the coronavirus (COVID-19) pandemic) and quickly became a top e-grocery player in the country. It then launched in Tel-Aviv in November 2020 and Paris in August 2021. In Paris, the service is already available in 10 arrondissements, a testament to the company’s rapid expansion.

In the second quarter of this year, the annualised gross merchandise value (GMV) run rate of Yandex’s e-grocery service was approximately GBP255mn ($351mn), up 2.3 times year on year. This metric is often used to measure the success of e-commerce companies. Now, though, Yango will be focusing on investment and international growth.

In a fragmented market with stiff competition, the key to beating peers will be rapid customer capture and expansion. Yango Deli’s first job in London is building brand recognition and reaching a broad customer base. It will be helped in this endeavour by Yandex’s wide reach (with services in 17 countries) as well as the e-grocery service’s own established international reputation – Yango Deli already has an audience of around 50mn people.

“We are now rolling out Yango Deli into high-potential European markets, and will take a decision regarding further expansion based on our success there,” Avtukhov said.