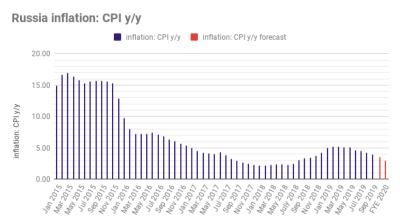 Russian inflation falls back to CBR’s target 4% level, more rate cuts are now on the cards
By bne IntelliNews October 7, 2019

Inflation is the biggest concern for the average Russian and after falling to a post-Soviet low of 2.3% in the middle last year, it rose again at the start of this year to over 5% on the back of oil price rises, sanction fears and a 2pp hike in the VAT rate in January.

The CBR has set a target level of 4% and hiked rates twice at the end of last year. But the impact of the VAT hike has been mild and inflation has fallen faster than expected. The CBR has cut rates three times this year already, the last time lowering the monetary policy rate by 25bp to 7%. The central bank is expected to continue to lower rates with more cuts, but not before the New Year starts.

Russia posted two months of negative growth in consumer prices in the summer. Rosstat reported the monthly CPI rate for September at -0.2% m/m – the same as in August. This was the first time since August to September 2017 that consumer prices fell for two consecutive months.

Deflation in seasonal fresh food was the prime driver for the negative price growth (prices for fruit and veg fell 6.3% m/m last month), with cuts to the cost of passenger transportation (-3.7% m/m) the other important factor, reports BCS Global Markets.

“Deceleration in inflation was widely expected and unsurprising. However, the main issue is whether the future CPI rate will remain under control, which is far from granted – we reiterate our YE20 forecast of 3.8% y/y (vs the govt’s 3% y/y),” BSC Global Markets chief economist Vladimir Tikhomirov said in a note.

In her comments following the announcement by Rosstat, the CBR’s First Deputy Chief Yudaeva did not rule out another rate cut but added that the CBR will carefully assess all factors before making its rate decision. The next monetary policy meeting is slated for October 25.

“We agree that the current level of inflation, as well as the projected further falls in the CPI rate over the next few months, do offer more space to manoeuvre in the monetary area. Thus, from a pure technical and macro perspective a 25bps rate cut seems like a done deal, probably as early as this month,” said Tikhomirov. “However, we see a variety of strong pro-inflation factors appearing on the horizon within the next 6-10 months – these include a rise in budget spending, planned increases to wages and pensions, a reversal in the base factor effect and uncertainty over the global economy and the state of commodity markets.”

A emotional debate has broken out amongst the liberal fraction that runs Russia’s macro and fiscal policy over the proposed spending that is part of the RUB27 trillion national projects programme ordered by president Vladimir Putin. The CBR in particular worries about the inflationary pressure associated with such a large increase in spending and erring on the side of caution as a result.

BCS expects annualized inflation to start reversing sometime in 2Q20 after reaching 3.1-3.2% year-on-year and has full year CPI forecast of 3.8% y/y for 2020. The official government estimate is much more optimistic predicting inflation will be 3% for all of next year.