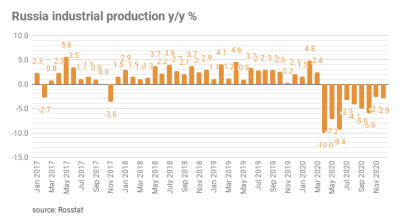 In 2020, Russian industrial production fell by 2.9% y/y. The data from Rosstat was in line with our expectations (-3%) and showed a significant improvement in the industrial dynamic in 2H20.

“After hitting the bottom in May when output was down 8% y/y, industrial production figures have been getting better since June. In December 2020, output was down only 0.2% y/y, helped by a rise in manufacturing production – up 4.4% y/y, the strongest growth since March 2020 before the pandemic hit,” said Tikhomirov. “Overall, last year, output in the resource sector fell by 7% y/y (-8.5% in December) and production in the utilities sector was down by 2.5% y/y (up by 4.7% y/y in December due to a colder winter). The manufacturing industry escaped contraction and closed the year 0.3% higher y/y.”

Russia’s economy was less hard hit than most of its European peers and is expected to bounce back this year. However, because of the chronic lack of fixed investment that bounce-back will be limited.

Data on production in the defence industry is classified, but we are certain that state procurements of military hardware have also ensured continued growth in this part of the manufacturing industry: according to Rosstat, production of ‘other machinery equipment’ was up by a solid 5.9% y/y in 2020.

The outlook for 2021 is for a smaller decline in 2020 GDP volumes: “We now expect -3.6% y/y vs -3.8% that we had in our forecast just 2 months ago. Last year’s weak base factor would support a strong bounce in industry and the economy in 2Q21; in FY20, we forecast that Russia’s industrial production will grow by 5% y/y, while the economy will rise by 3.3% y/y,” says Tikhomirov.

Modest recovery in prices of new apartments in Montenegro in 4Q20

Apartment prices increased 15% q/q in 4Q20 but were still down by 11.3% y/y in emerging Europe's worst hit economy by the coronacrisis.

Romania’s public debt-to-GDP ratio up 12.4pp y/y to 47.7% at end-2020
10 hours ago
Grey economy almost a third of GDP in Bosnia, Montenegro and Serbia
1 day ago
Belarus retail sales down by 0.9% in January
2 days ago
Consumer prices increased by 1.1% in Serbia in January
2 days ago
Modest recovery in prices of new apartments in Montenegro in 4Q20
3 days ago