“The principal reasons for Ebitda falling short of our forecast was the RUB36bn ($0.55bn) hedging loss, which was higher than we expected, and the lower-than-estimated contribution from the West Qurna-2 project, which made up less than 4% of 2Q16 Ebitda,” the bank commented on August 29, referring to Lukoil’s major extraction operation in Iraq.

“Notably, the company reported stellar FCF [free cash flow] (RUB57bn in second quarter and RUB 93bn in first half of 2016), as a result of which net debt/Ebitda dropped to 0.66x,” Gazprombank stressed. 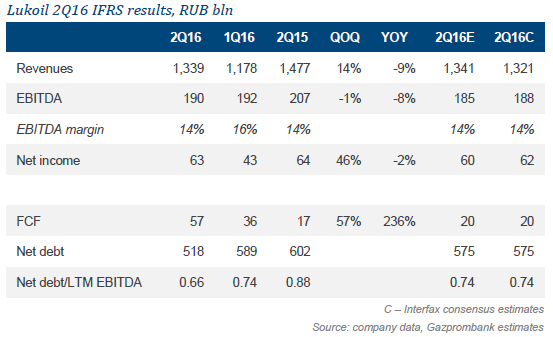 As Lukoil will only announce the interim dividend recommendation in 2-3 months, the numbers will not directly impact the dividends and will therefore have only neutral effect on the shares, Gazprombank believes.

At the same time, the bank notes that the yield curve for Lukoil bonds “rightfully lies closer to sovereign yields, as the company remains the only investment grade name in Russia’s oil and gas industry and has the lowest leverage in the sector”.

The recent postponement of oil company Bashneft's privatisation removes or at least rolls back the short-term risk of a one-off spike in leverage on the back of acquisition activity, Gazprombank notes.

Lukoil is one of the main contenders for acquiring the state privatisation gem Bashneft, with which it already operates a joint extraction venture on major Trebs and Titov fields in Russia.

However, the privatisation was abruptly postponed, with Russia’s largest oil company state-controlled Rosneft reportedly ready to bid $5bn for Bashneft.

The Russian tech firm Sitronics Group, which is part of AFK Sistema, has launched a RUB500mn ($7mn) production facility for servers at the Lampiris factory in Siberia's Novosibirsk region. "Over ... more

Russia to step up control over foreign tech giants

As of January 1, 2022, a law comes into effect in Russia aimed at increasing control over local operations of foreign tech giants. This law requires that foreign companies with “large Russian ... more

The Russian government forecast the Russian fleet of electric vehicles (EVs) will reach 2mn units by 2030, but a new study from PwC says that Russia be lucky to achieve even half that number by ... more