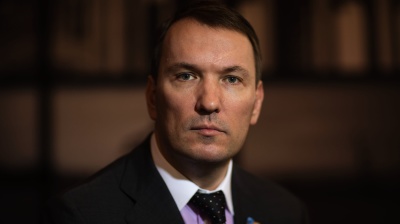 Dmitry Kostygin, co-founder of Ulmart, was jailed on charges of defrauding Sberbank. Once the largest online store in Russia, the company has filed for bankruptcy after years of infighting amongst its shareholders.
By bne IntelliNews & EWDN March 13, 2020

Leading Russian e-commerce store Ulmart has filed for bankruptcy after its owner got ensnared in legal problems that led to his arrest.

In a riches-to-rags story, the St Petersburg-based online store was growing fast and told bne IntelliNews in an interview in 2015 it was planning an IPO in 2016.

Founded in Russia’s northern capital, Ulmart was Russia’s largest online retailer at the time specialising in consumer electronics, with 2014 sales estimated at $1.3bn.

Part IKEA and part Amazon, Ulmart was an early success story in Russia’s burgeoning online business. In its best days, the company had nearly 50 urban and suburban fulfilment centres deployed across Russia. Selling virtually everything from electronic devices, to home appliances, to books and music, Ulmart topped e-commerce rankings in 2013-2016, generating up to $820mn in total sales revenues.

The company said that the 2014 crisis was a boon as bargain-hunting shoppers turned to the online store for deals after income growth stopped.

In 2016 the current online leader Wildberries posted a turnover of RUB45.6bn ($620mn), overtaking Ulmart with RUB38.8bn in turnover to claim the title of Russia’s largest online retailer. In 2016 Ulmart was country's 40th largest retailer overall.

However, things went wrong in 2017 when its co-owner Dmitri Kostygin was detained in St Petersburg on accusations of credit fraud by Russia's largest bank, Sberbank. The charges came on the back of reports of a shareholder conflict within the company between Kostygin and US citizen Avgust Meyer, and their partner Mikhail Vasinkevich, a wealthy St. Petersburg businessman who invested in the company in 2010.

Allegedly Kostygin took a RUB1bn renewable credit line from Sberbank "with no intent to comply with the conditions of the deal," and provided the country's largest lender with "misleading information on Ulmart's financial situation," the prosecutors claimed at the time.

Kostygin was placed under house arrest as the two sides went to court. Kostygin hit back in November 2017, accusing Sberbank of corporate raiding with the intent of taking Ulmart over.

In the meantime the business deteriorated. In January 2018 Kostygin filed a bankruptcy lawsuit against his business partner Vasinkevich.

Kostygin claimed that Vasinkevich owed him RUB405mn ($7.1mn) and refused to repay the debt or reach an out-of-court settlement. Vasinkevich, in turn, said that Kostygin's lawsuit was an attempt to exert pressure on Ulmart's management.

Now the entire company has collapsed and has filed for bankrupcy, reports East-West Digital News (EWDN) after three years of internal fighting amongst the shareholders.