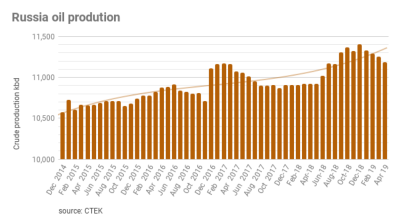 CDU TEK published its oil and gas production data for April that showed total Russian crude output was down 0.6% m/m and continued to be driven by the production cuts at integrated oil companies under the OPEC+ agreement.

Gazprom’s gas production was published at 44.2bn cubic metres (bcm) in April, according to Interfax, implying a modest increase of 1.6% y/y.

"We calculate that Russian crude production in April was 1.6% below the October 2018 level (the reference point for the OPEC+ agreement). We note that the highest contribution to the production reduction since October 2018 has been made by Gazprom Neft, which cut output 2.4%, while non-integrated oil companies reduced crude production only 1.0%," VTB Capital analysts said.

"Gazprom’s gas production increased for the eighth month in a row in April, despite weaker gas exports to Europe, which are down 9% YTD. Novatek’s consolidated gas production (including its share in joint ventures) increased 14% y/y, thanks to the contribution from Yamal LNG (+209% y/y) and higher production at Arcticgas (+1.6% y/y)."