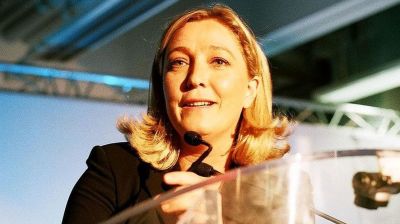 The Central Bank of Russia (CBR) has revoked the license of a Moscow-based lender infamous for having lent $11mn to the National Front party of French far-right leader Marine Le Pen.

The regulator is closing the Russian-owned First Czech-Russian Bank after a probe discovered the lender had lost all of its capital. A statement on the CBR's website on July 1 also referenced "poor asset quality" and failure by the owners to take the necessary steps "to normalise its work".

The CBR, led by governor Elvira Nabiullina, has shuttered 44 banks in the first six months of this year as part of “a McCarthyite crusade” to clean up Russia's murky financial system.

Sweeping away crooked and weak banks from Russia's Baltic exclave of Kaliningrad to Vladivostok in the Far East, and from Arctic Murmansk to Dagestan in the Caucasus, is already paying off by improving lending practices, reducing corruption and increasing transparency.

In the two years to January 2016, the number of banks in Russia was slashed by 20% to 596 from 733. The trend is accelerating this year and the targets are getting bigger with the stripping of licenses belonging to Vneshprombank, the nation's 37th largest and Intercommerz Bank, the 67th biggest.

The First-Czech Bank, Russia's 126th largest by assets, was set up in 1996 to service international trade and investment projects between Russian and the Czech Republic and to provide banking services to companies engaged in Russian-Czech international trade, and to Czech-invested Russian companies and organisations. The bank is 100% owned by a low-profile Russian financier Roman Popov.

The bank was initially established as a Czech-Russian joint venture, with the state-owned Czech Investment and Post Bank taking a stake in the Moscow-registered bank.

However in 2000, KBC's Czech subsidiary CSOB acquired the assets and liabilities of Czech Investment and Post Bank, but declined to buy the Russian First Czech-Russian Bank. This left the Czech government looking for another partner in Russia, and they found one in the Russian company Stroytransgaz, the engineering and construction company, and key supplier of oil pipeline equipment to Gazprom.

Stroytransgaz then entered into a five-year agreement with the Czech government, with the aim of building up the bank's capacity before selling it.

This is where Popov comes in. In the early 1990s, he was the CFO of Stroytransgaz, but then took up the role of chief executive of FCRB.

Popov then opted to sell his shares in Stroytransgaz and use the funds to become the majority shareholder of FCRB. In 2009, it became the first Russian bank to win a banking licence to operate within the European Union in the Czech Republic.

Ar the time, Popov said his goal was not only to break into the European trade finance market, but to improve the image of Russian banks.

"There is some kind of prejudice in the market against Russia and this is what we are trying to change," he told local media in 2009. "We strongly believe in communication. Russian banks are not known for their transparency, but this bank aims to change this."

RBC newspaper reported that Czech Embassy in Russia, as well as Czech Airlines has funds frozen in the bank.

Le Pen's cash-strapped National Front party scored the loan from the Russian lender in 2014 after being turned down by banks all over the continent.

Her party has appealed to another 45 foreign banks to help finance upcoming election campaigns, including her presidency bid next year, according to a Politico report in May.

Loan requests had been dispatched to the French offices of 45 foreign banks, including Barclays, JP Morgan Chase, as well as unnamed Chinese and Indian banks. None of the banks had replied at the time, Politico said.