Russia and Ukraine are locked in a dangerous new row, this time over Transnistria, the pro-Russian breakaway region in Moldova that many fear will form a new front in Russia’s attempt to redraw the post-Cold War map of Europe. While Moscow accuses Kyiv of imposing a blockade against the region and increasing its military presence at the border, the Ukrainian government fears a Russian military threat originating from Transnistria.

“There are complex pressures [on Transnistria],” Vitaly Ignatiev, the separatist region’s deputy foreign minister, warned on June 16, pointing to Ukraine’s military activities along its border with the internationally unrecognised state that declared its independence after a brief 1992 war with Chisinau. Ignatiev was quoted by the Institute of CIS Countries, a Moscow-based think-tank that lobbies for Russian interests in the post-Soviet space.

Ignatiev said Ukraine was “digging trenches” and strengthening its controls along the border, and that Ukrainian officials had made statements about an alleged threat from Transnistria. He also claimed that units of Ukraine’s National Guard have been deployed close to the border with the breakaway territory. “All this creates a very bad atmosphere,” he underlined.

The government in Kyiv has indeed been expanding its security measures along the border with Transnistria, but the reason given is the fear of a military threat from the region. In late May, Viktor Nazarenko, head of the State Border Service, said in an interview with Ukrainian broadcaster Fifth Channel that, “the threat from Transnistria is of both a military and, let’s say, technological nature… We believe that this area poses a threat to the security of the [Ukrainian] border.”

Russia has a peacekeeping contingent based in the breakaway region, which consists of around 400 Russian soldiers, as well as a significant number of troops from Transnistria and Moldova. Volodymyr Ohryzko, a former Ukrainian foreign minister, believes that Russian troops could be mobilised by Moscow to provoke a military conflict on Ukraine’s western border. “This region is very important for Moscow, as it makes it possible to provoke events that could be used as a justification for intervention [in Ukraine],” Ohryzko tells bne IntelliNews.

On May 21, Ukraine’s parliament adopted a bill on suspending its military co-operation with Russia, including the transit of supplies to Russia's peacekeeping forces in Transnistria across Ukrainian territory. This move sparked anger in Moscow, with the Russian government promising to resupply its troops by air over the territory of Moldova.

Experts believe that Kyiv is trying to use Russia’s dependence on transit through Ukrainian territory as a lever for exerting additional pressure on the Kremlin over its support for the separatists fighting in the Donbas region of eastern Ukraine. “Kyiv is trying to put pressure on Moscow,” Balazs Jarabik, visiting scholar at the Carnegie Endowment for International Peace, tells bne IntelliNews.

“This is happening due to the fact that we have a situation of ‘neither war nor peace’ in the Donbas. Russia understands that more war would push Ukraine further away and also lead to a mobilisation of West[ern support] for Ukraine, including more sanctions… Moscow is ignoring the weapons withdrawal stipulated by the Minsk agreements, and Kyiv is essentially boycotting the political process. So both sides are looking for other pressure points,” Jarabik claims.

The fact that Ukraine has decided to suspend its military agreements with Russia more than a year after the start of the separatist war in the east and the annexation of Crimea, fuels suspicions that Kyiv is trying to find additional leverage in its dealings with Russia. “I don’t understand why this has happened only now. There is no need for us to maintain diplomatic relations, to keep agreements with an aggressor. However, we have a hybrid war [in the Donbas], and hybrid politics [in Kyiv]. I believe that [the government’s] actions should be more determined and consistent,” Ohryzko says.

Meanwhile, Ukrainian President Petro Poroshenko might have a more complicated game plan in mind. Some experts don’t rule out that Kyiv, together with Chisinau, could impose an economic blockade against Transnistria with the aim of undermining the region’s already fragile economy and forcing its government and population to look for possible ways to reintegrate with Moldova. “We have agreed to coordinate our actions on Transnistria in order to facilitate the unfreezing of the given conflict, and help sovereign and independent Moldova to regain its territorial integrity by reintegrating the Transnistria region,” Poroshenko said during a meeting with his Romanian counterpart Klaus Iohannis in March.

The recent appointment of the former Georgian president Mikheil Saakashvili to the position of governor of the Odesa region, which borders Transnistria, is a clear sign for many in Moscow that Kyiv is mulling a possible blockade against this breakaway territory.

Some Russian media and political analysts even speculate on Saakashvili’s possible role as a person who would be able to provoke a new military conflict with pro-Russian Transnistria. In 2008, Saakashvili, who was president of Georgia at the time, responded to Russian provocation by getting into a brief but bloody war with Russia after attempting to re-establish Tbilisi's rule over the breakaway Georgian regions of South Ossetia and Abkhazia.

However, Jarabik is skeptical. “Saakashvili’s main goal is not to open another front next to Odesa, but to push for key reforms and [attract] investments as much as possible – at least as much he did for [Georgia’s coastal city of] Batumi,” he says, adding that “a full-fledged economic blockade” against Transnistria is unlikely given that Kyiv has failed to impose one against the rebel-controlled territories in the Donbas.

However, Jarabik says Saakashvili might have been brought in to fight the rampant smuggling that goes on between Ukraine and Transnistria. “That is something Saakashvili can, and it seems so far is willing, to tackle within the campaign of a fight against corruption.”

Kyiv's inability to impose a full-fledged economic blockade against the rebel-controlled territories in the Donbas is evidenced by unconfirmed reports in the Ukrainian media of huge volumes of smuggled goods, including coal and rough materials, moving between Kyiv-controlled and rebel-controlled areas, despite a nominal strict economic and transport embargo. In some cases, Ukraine’s law enforcement agencies are allegedly involved. “Saakashvili has verbally declared that he will not tolerate a ‘black hole’ on the border with Transnistria. However, that is a political question. The country’s officials are responsible for that issue, not the [regional] governor. And I don’t know how strong an interest those high officials would have in such a move,” Ohryzko says. 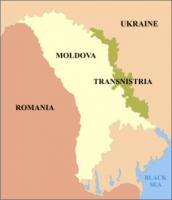