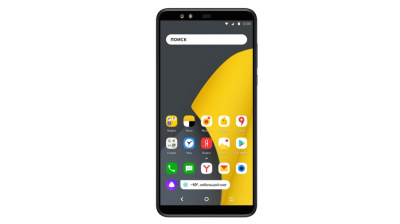 Russian internet powerhouse Yandex has sold at most 1,500 of its new smartphone since the launch in December
By Ben Aris in Berlin January 31, 2019

Russian internet powerhouse Yandex has suffered a rare defeat after its attempt to break into the smartphone business fell flat on its face. Launched in December to much fanfare, the Yandex.Phone had sold less than 500 units as of January 20, according to the GfK market research company, Vedomosti reported on January 31.

The biggest player in Russia’s online ecosystem and the most valuable Internet company in Europe, Yandex was hoping to support its core business by selling smartphones that came with a package of Yandex services and apps pre-installed, including Alice, the listening smart assistance and Russia’s answer to Alexa.

Real incomes in Russia have been shrinking but the process of people upgrading to better smartphones continues, and sales of handsets remain strong.

However, after investing millions into developing the phone Yandex reported that it had sold only 450 units through retail chains as of January 20, according to GfK.

The company started offering the phone in its own online stores on December 6 last year and launched it in the major consumer electronic stores the next day at the start of Russia’s busiest shopping month.

Yandex also offered other perks such a six-month subscription to its premium services online, discounts on its taxi hailing service Yandex.Taxi, a subscription to its streaming offering Yandex.Music and films in Kinopoisk, free food delivery, and a 10% cashback on purchases paid via Yandex.Money.

Consumers were not impressed. However, sales may have been a bit higher as the GfK statistics do not take into account the main sales channel, which is Yandex’s newly launched Beru.ru that is the first online shop to be launched on Yandex.Checkout, a retail platform the company is developing with Sberbank that will be ramped up this year. Yandex.Checkout is intended to be a Russian Amazon.

Yandex itself did not comment on the actual number of sales, and the leading consumer electronics stores that carry the phone wouldn't comment either.

Research by Mobile Research Group estimates that some 400 units were sold through Beru.ru and another 1000 units had been sold via retail outlets by the middle of January, reports Vedomosti.

Experts believe that launching in December was a mistake as other producers typically drop prices at this time of year to catch the New Year shopping rush, whereas Yandex offered its phone at full price. (Orthodox Russia doesn't really celebrate Christmas and New Year’s Eve is the big winter holiday that includes gift giving.) At the same time the advertising campaign to support the phone ended in January when typically there is a post-holiday wave of smartphone purchases in the annual sales period.

February and March will also be tough months as Chinese manufacturers are due to present their new product lines on the Russian market. To be successful the Yandex phone needed to either compete on price or to offer a unique service or feature and the phone does neither.

This was not the first attempt by a Russian firm to break into the smartphone market.

Russian internet provider Yota launched its Yota smartphone in 2011, which did have a unique feature: two screens. The front of the phone is a regular phone screen, but the back of the phone was an e-ink screen typical of e-Book readers like Kindle.

However, sales of the Yota phone have also been disappointing and with a price that is twice that of the Yandex phone, they are considered expensive on the Russian market.

Yota sold a 65% stake to Hong Kong-based REX Global Entertainment Holdings for $100mn in October 2015 and the company is concentrating on building up a customer base in China.