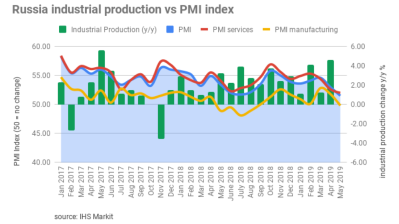 The IHS Markit Russia Services Purchasing Managers Index (PMI) posted 52.0 in May, slightly down from 52.6 in April.
By bne IntelliNews June 5, 2019

The wind has gone out of Russia’s service sector that has been the one vibrant part of the real economy for the last few years, dragged down by stagnant real income growth and the miasma that is lying over the retail sector.

The IHS Markit Russia Services Purchasing Managers Index (PMI) posted  52.0 in May, slightly down from 52.6 in April, but still above the 50 no-change mark. While the service sector is still expanding the rate of growth has considerably softened compared to the robust growth of the last few years.

“May survey data signalled a moderate rise in business activity across the Russian service sector. But the upturn was the slowest since May 2016 amid signs of softer domestic demand conditions and only a modest increase in new business,” Markit said in a press release.

The slower rise in new orders contributed to the first fall in employment since last September, as backlogs of work continued to decrease.

The good news is new export orders grew at a strong rate and price pressure was low as the effects of the VAT hike by 2pp in January are already wearing off.

The services sector result follows on from the manufacturing PMI that was released last week that fell into the red zone for the first time since August last year at 49.8 in May. Any result under 50 represents a contraction in the sector.

Taken together the poor results pulled the composite business PMI down to 51.5 in May from 53.0 in April, as economic activity in both manufacturing and services was softer than in previous months and the rate of growth was the slowest since May 2016.

As bne IntelliNews has argued recently, Russia’s economy is stagnating, as the Kremlin battles to put in place reforms that will improve the business environment, but is betting heavily that a massive RUB27 six-year spending programme on the National Projects will be enough to kickstart growth – although even this is not expected to kick in until 2021.

The most interesting aspect of this month's report is that while domestic demand is lacklustre, Russian service providers are actively building up exports and the growing demand from abroad to some extent offset the poor results at home.

Access to new markets to compensate for soft markets at home perhaps contributed to the optimistic outlook most managers on Markit’s panel have for the rest of the year.

Croatia to be among countries worst hit by tourism collapse this year, says UNCTAD
23 hours ago
Russians, Serbians, Turks the biggest property buyers in Montenegro
1 day ago
Polish PMI advances but remains below 50 points as restrictions lifted
1 day ago
Czech PMI slightly up in June but still under 50-point threshold
2 days ago
Russian corporate profits recovering, but still down by half on 2019 in April
3 days ago