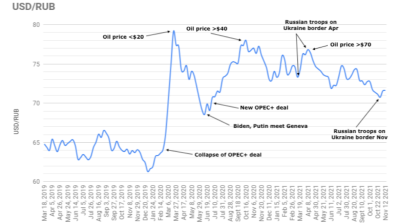 The ruble's exchange rate to the dollar is a fairly good barometer for the level of geopolitical tensions, but the Russian currency has more or less ignored recent talk about a possible new invasion of Ukraine.
By Ben Aris in Berlin November 16, 2021

The ruble’s exchange rate to the dollar has acted a fairly good barometer for the level of geopolitical tensions in the last two years.

The ruble has been through some wild swings since 2019 when it was trading in a band between RUB62 and RUB65 to the dollar.

The first problem struck in March 2020, when Russia walked out of talks to renew oil production cuts with OPEC. The deal was dubbed OPEC+ as Russia had been co-ordinating production with the other members, but is not a member itself. However, in March it withdrew and oil prices quickly collapsed to under $20 a barrel within a month, while the ruble slumped to RUB80 against the dollar.

Then in a painful double whammy, Moscow was put on lockdown in April as the authorities finally admitted that the coronavirus (COVID-19) epidemic was out of control.

The oil production crisis was eventually resolved in July and a new deal was struck that saw oil prices start to rise again and the ruble strengthen to around RUB69. However, the main driver of the exchange rate was a summit between US President Joe Biden and Russian President Vladimir Putin in Geneva on June 16.

That was taken by the markets as a serious reduction in tensions and more importantly, a significant reduction in the chances of any new sanctions on Russia, which is what investors fear most; among the possible targets of new sanctions is the possibility of banning foreigners from owning or trading the Russian Ministry of Finance ruble-denominated OFZ treasury bills – a business worth tens of billions of dollars.

The reset didn't go so well and tensions ratcheted up again as the year came to an end even as the oil price recovered to over $40 a barrel, a price where the Russian budget breaks even.

However, while the price of oil lost 56% of its value between March and the start of May, the ruble was only down by 19% over the same period. What was propping it up was that foreign investors were flooding back into the high-yielding OFZ bonds on the promise of improved relations after the Geneva summit.

By the start of 2021 things had calmed down again and now oil was approaching $70 and Russia Inc. was booming. The stock market was on a tear in late 2019 and revisiting valuations not seen since Crimea’s annexation in 2014, and growth was strong. But geopolitical tensions flared up again as Russia started moving troops up to Ukraine’s border in March, sparking talk of a new Russian invasion.

As the showdown continued the ruble slid from around RUB72 down to at RUB77, when Russian Defence Minister Sergei Shoigu finally announced that the soldiers would be sent home in time for the Easter holidays.

With another crisis averted the oil dynamics took over again and now the budget started running a serious surplus. The coronavirus (COVID-19) pandemic struck in April that year but it has had a relative small impact on the exchange rate, which is more dependent on the macro fundamentals, and those were good.

Now Russia has a fresh Ukraine border crisis as reports surfaced last week of a new build-up of Russian troops close to Ukraine.

Ukraine’s Deputy Defence Minister Hanna Maliar told the Financial Times at the weekend that there are some 90,000 soldiers near Ukraine’s border and pundits have called the current situation “the most dangerous” since the 2014 annexation of Crimea.

But market participants are more sanguine, as they see the current scaremongering more as being domestically generated by conservative US political forces that are unhappy with Biden’s attempt to reset relations with Russia ahead of a second summit scheduled for the coming months.

Despite the talk of war the share of foreign investors in the OFZ market has been rising again and reached 21.6% as of September. Likewise, the RTS stock market rally that was just getting going at the start of 2020 before the double whammy put the kybosh on it also restarted in last 2020 and the RTS index touched a recent high of 1,900 – a level it has not seen for more than decade.

“The media again began to speculate on various scenarios of a military clash between Russia and Ukraine, and one of the options was that Kiev receives support from the Western countries and Nato. Russia denied such plans, and the Western military said that there was no confirmation of Moscow's preparations for a military operation – both went almost unnoticed by investors,” Vladimir Tikhomirov, the chief economist of BCS Global Markets, said in a note.

“We could speak at length about the factors and sources of mounting geopolitical tensions, but in our opinion they are directly or indirectly related to the preparation of the US-Russia summit. Even a faint hint of a potential thaw in relations between Moscow and Washington immediately provokes a sharply negative reaction in Kiev, Eastern Europe and among the anti-Russian lobby in the United States. It is not surprising that the sources of recent reports about the alleged transfer of Russian troops and preparations for an offensive in Ukraine were in Ukraine, Poland, the Baltic states, and were also associated with conservative media in the United States,” Tikhomirov added.

The ruble exchange rate highlights the lack of fear, as while it has ticked up by about 100 kopeks since the first reports appeared, it has already stabilised at around RUB72 to the dollar.

If things get worse then the ruble will start to weaken again, but for now currency traders are dismissing the talk of war as mostly hot air.