Russia’s RTS stock index breaks above 1,800 for the first time in 10 years 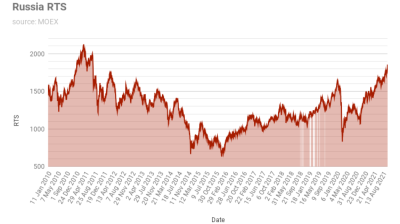 Russia’s stock market has been moribund for most of the last six years after sanctions were imposed in 2014 following the annexation of the Crimea, but it has taken off this year as the economy recovers. / bne IntelliNews
By Ben Aris in Berlin October 8, 2021

Russia’s dollar-denominated Russia Trading System (RTS) index broke above the 1,800 mark for the first time in over a decade on October 7 to end the day at 1,854.

Russia’s stock market has been enjoying a rally this year that has seen the overall market up by around a quarter. Banking stocks have been the preferred investment, used by investors as a proxy for exposure to the general economic recovery, which were up some 60% YTD as of last week.

The rally on the RTS comes in parallel with a general enthusiasm for Russian companies that has led to an IPO boom, as bne IntelliNews has recently reported. Russia has seen almost a dozen companies list in the last year, mostly from the tech and retail sectors, raising billions of dollars in the process. International portfolio investors are overweight Russian stocks at the moment, not because they have been buying the traditional blue chips, but because they have loaded up on all these debutants.

However, the market surged again this week, driven by easing political tensions and rising oil prices that crossed the $80 mark for the first time in years. At the same time investors have been buying into Russia’s national gas company Gazprom as gas prices have soared eight-fold since the start of the year.

In recent weeks portfolio investors have been taking profits in banks and reallocating their investments into oil and gas stocks, which gained 4pp this week to return 39% YTD and would have closed the gap with banking shares, except these soared as well to finish the week returning 70% YTD.

This is the second time the market has tried to rally. For most of the years since sanctions were imposed in 2014 following the annexation of the Crimea, and an oil shock that same year, the RTS has been range-bound between 900 and 1,300, but the best blue chips started to rally in 2018 when the Russian economy finally started to recover. Names like Russia’s biggest supermarket chain X5 Retail Group and the leading real estate developer PIK saw the value of their shares double that year. But in 2019 the rest of the market was being lifted as well and the RTS broke above 1,400 for the first time in five years at the end of the year.

2020 looked like the rally would continue, fuelled by Russian companies' proclivity to pay out the highest dividends in the world – twice the MSCI EM benchmark average. However, after yet another oil price shock struck in March, quickly followed by the start of the coronacrisis, the index collapsed to around 800, before recovering some of the ground lost during the summer.

Moods improved as the autumn arrived. The tête-à-tête between Russian President Vladimir Putin and US President Joe Biden in Geneva on June 16 did a lot to alleviate increased sanctions fears and reduce political risk. Then the announcement of effective vaccines that arrived in the following months promised an economic recovery in 2021 that set a new rally off, or at least a return to the previous rally in 2019.

In addition to the return of enthusiasm for Russian shares has been the push given as Russians turn to the stock market for the first time after the traditional store of wealth – high-yielding bank deposit accounts – saw returns fall to next to nothing after a six-year-long string of rate cuts by the Central Bank of Russia (CBR). As bne IntelliNews reported, SPB Exchange has seen an explosion of retail investors investing in stocks, including a large share going into international stocks as Russians seek to protect themselves from the volatility of the ruble.

Retail investors are also helping to drive the current rally and now account for some 40% of the daily turnover on the Moscow Exchange (MOEX).

The surge in the market in the last week has been remarkable, say analysts. Investment flows tracker EPFR Global released its fund flows data through the week ending October 6 and found Russian assets saw net circa $50mn inflows from combined equity and bond fund flows in the reported week vs circa $80mn outflows during the previous week. Russian dedicated funds saw even more: inflows of circa $70mn, up from $30mn the week before – the best result since March.

“Global energy rally finally brought quality money into Russia traditional funds at a pace unseen since the start of the pandemic, while EM stocks also attracted new cash,” said Slava Smolyaninov, head of strategy at BSC GM, in a note.

“Active Russia-dedicated funds enjoyed [their] best weekly inflows since pre-pandemic January 2020 as they registered a net weekly intake of $100mn,” Smolyaninov continued. “The largest inflows came into funds managed by Pictet followed by the VTB Russia fund and Sberbank fund focused on natural resources. These intakes easily outweighed outflows from ETFs led by $32mn out of the RSX ETF and even $5mn out of the levered Direxion Russia Bull 2x fund.”

Russia’s market is being lifted as well as inflows into global emerging market equity funds, which also saw a solid inflow of $1.5bn in the same week – the best since August – and have enjoyed positive inflows for nine weeks in a row now.

The retail investors are playing an increasingly important role in the ebb and flow of funds. MOEX published its retail investor statistics for September: retail inflow picked up to RUB35bn ($481mn), rising from the previous month's RUB28bn and coming in line with the YTD monthly average, Sberbank reports. That is $120mn a week equivalent, on a par with the international inflows of the last week, giving the market added momentum.

BCS GM reports that while there was a correction last week as investors took some profits, especially from the banking sector stocks, Russian retail investors took advantage of the dip to buy into the weakness and start the ball rolling, only to be joined this week by international investors.

“Inspired by a powerful energy shortage in Europe, Retail bought into outflows from Russia and EM ETFs to propel the market higher. We see negative flow momentum building again, but we stay positive in the long run,” Smolyaninov said. “Retail en masse has been right to aggressively add to their net Long positions through September, enjoy the energy-driven rally and remain a buyer despite the market hitting new highs every other day and the worrisome technical picture signalling short-term overbought conditions. This differs from the more opportunistic behaviour typical of Retail in the past years, when they usually sold into such strong market upticks.”

Analysts are optimistic about the outlook for the rally to continue. October is when the traditional “Santa Rally” begins, as Russia’s equity market is prone to seasonal rallies caused by tax payments and fund allocations amongst major funds.

The Santa rally runs over the fourth and first quarters ahead of the dividend payment season in August and then sells off after the dividends are collected, only to start rallying again as the weather gets colder. New mandates issued at the start of the year by major funds also contribute to these rallies.