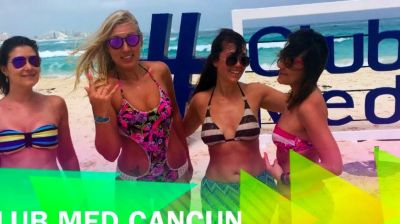 Club Med owner Fosun seeks sunny skies as it expands its business into Russia.
By Jason Corcoran in Moscow November 17, 2016

Renaissance Capital, the Russian investment bank controlled by billionaire oligarch Mikhail Prokhorov, is understood to be getting close to a tie-up with China’s Fosun International.

Talks have been underway since August when the Vedomosti daily reported that Fosun would initially become a minority shareholder in RenCap with an option to increase its stake as the investment bank’s business expands and its profit rises.

A spokesperson for RenCap declined to comment, while Fosun and Oneximbank didn't immediately respond to enquiries.

Fosun, a Chinese conglomerate, is best known in Europe for its investment in family holiday resort chain Club Med. The group, which also owns the Cirque du Soleil theatrical act, already has two businesses on the ground in Moscow in the form of its Fosun Management and Fosun Eurasia Capital units.

Both are conveniently based at 10 Presnenskaya Naberezhnaya in the same block of the Moscow City skyscraper occupied by RenCap.

One RenCap staffer told bne that some bankers are even now brushing up on basic Mandarin. “We haven’t seen them yet on the trading floor, but you probably know more than we do,” said the RenCap banker.

Fosun Management is focused on investment banking in Russia and the Commonwealth of Independent States (CIS), while Fosun Eurasia Capital is an investment advisory boutique fronted by Tanya Landwehr, a former senior exec at BNP Paribas Russia’s investment joint venture.

Fosun was set up in 1992 in Shanghai. Its international unit was listed on the main board of the Hong Kong Stock Exchange in 2017.

Fosun Management, which is owned by billionaire Guo Guangchang, has become one of the most prolific cross-border dealmakers in China, spending more than $8bn in the last couple of years.

In 2014, it made a string of deals, including the purchase of a 23% stake in German tailor Tom Tailor and a 20% stake in US insurer Ironshore for $463mn. In the same year, it also invested in Studio 8, a Hollywood movie studio, with the goal of bringing Hollywood film-making knowhow to China to nurture the domestic industry.

But Fosun Management’s most noteworthy deal to date occured in January 2015 when it paid $1.1bn for Club Med, the pioneer of all-inclusive resorts which started on the Mediterranean island of Mallorca in 1950. It was a lofty price for a loss-making company, which last paid a dividend in 2000 and whose customer base is shrinking.

The Moscow operation has been rather quiet so far, although Reuters reported on November 4 that Fosun Management was in exclusive talks to buy a stake in gold producer Polyus in what would be its maiden Russian deal. Reuters noted that Fosun Management is looking to invest around $2bn in Polyus, which owned by Russian billionaire Suleiman Kerimov.

However, Fosun Management owner Guangchang said in January that his group “believes in original ideas” and has gradually evolved into a multinational enterprise while taking roots in Chinese investments with global competencies.

“We have our own unique ‘Insurance + Investment’ twin-driver business model,” Guangchang said in a letter to the group’s partners. “We have identified and accumulated our edges, deepening our footholds in industries, integrating and ploughing deep into the industry chains. We are prepared to deliver better products and services to clients addressing their three core concerns, which are wealth, health and happiness, in order to create better value for society.”

Fosun Management last year also acquired Portuguese insurer Caixa Seguros e Saudea for €460mn. It bought US insurer Meadowbrook for $433mn in December; a 20% stake in Ironshore in August; and 80% of Portugal’s Fidelidade in January.

The group said it is planning to buy more financial companies, such as an insurer or a bank, especially from Europe or Japan.

Other Fosun Management investments include a stake in holiday package operator Thomas Cook. Last year it took a 5% stake, but increased it to 8.2% as sterling fell on the Brexit vote. Since then, Thomas Cook has announced a plan to buy 50 hotels and resorts around the Mediterranean in a deal with Fosun Management. Destinations will be Spain, Greece, Cyprus and Turkey. Fosun will provide the money and Thomas Cook will manage the properties under its existing hotel brand names.

There is also a new 807-apartment and 187-villa resort at Sanya, off the southern China coast, which will be opened next year after a CNY11bn investment. A second China ski resort will be opened at the end of this year.

The potential Fosun Management tie-up with RenCap comes as Prokhorov continues to shed assets after RenCap and his other businesses were raided by Russia’s Federal Security Service (FSB) earlier this year.

Dubbed the “Great Gatsby oligarch” in a bne profile in June, Prokhorov fell foul of the Kremlin following a series of investigative reports by his RBC media holding into individuals close to the seat of Russian power. A source close to Prokhorov’s Onexim investment group told bne that the group believes the raids were authorised by President Vladimir Putin himself after RBC reported on the business dealings of his daughter Yekaterina and her husband Kirill Shamalov.

RenCap, which celebrated its 20th anniversary last year, has lost ground to state-controlled investment banks VTB Capital and Sberbank CIB. Both Sberbank and the VTB parent group were slapped with sanctions over Russia’s annexation of Crimea and its involvement in the civil war in Ukraine, but that hasn’t stopped them pulling away from RenCap on the domestic market.

bne reported in October that RenCap’s group net profits for the first half of this year tumbled by 74% to $2.7mn from $10.5mn for the same period a year ago. Profit at its UK unit dropped by 45% during 2015.