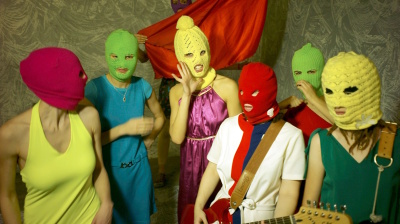 Maria Alyokhina left her mobile phone behind to act as a decoy and prevent the police from tracking her. / Igor Mukhin
By bne IntelliNews May 12, 2022

Maria Alyokhina, the head of the Russian activist punk rock group Pussy Riot, has fled to Lithuania in May, the New York Times reported on May 10.

In an interview, the 33-year-old said she had managed to escape Moscow disguised as a meal delivery courier, leaving her mobile phone behind to act as a decoy and prevent the police from tracking her.

She arrived via Belarus and had a Lithuanian visa, according to the NYT. More members of the group are now fleeing to Vilnius. In recent years, Vilnius had become a home for an increasing number of Russian dissidents and exiles.

“A lot of magic happened last week,” she said, recalling the three tries it took her to cross into Lithuania from Belarus. “It sounds like a spy novel.”

Last September Alyokhina was sentenced to one year of "restrictions" on her freedom, which included judicial controls, night curfews and a ban on leaving Moscow, for having called for a demonstration against the arrest of Russian opposition leader Alexei Navalny. At the end of April, the Russian justice system toughened those measures, replacing them with a prison sentence.

Pussy Riot has also been named a foreign agent by the Putin regime. The designation essentially makes it impossible to work inside Russia, as companies risk backlash for collaborating with a so-called foreign agent.

Pussy Riot rose to prominence in Russia and internationally in 2012 when they staged a protest inside Moscow’s Christ the Saviour Cathedral. Members of the punk rock band then protested against the regime of Vladimir Putin and were repeatedly sentenced to prison, LRT.lt, the website of Lithuanian national broadcaster LRT, reported on May 11.

“I don’t think Russia has a right to exist anymore,” she told the NYT. “Even before, there were questions about how it is united, by what values it is united, and where it is going. But now I don’t think that is a question anymore.”