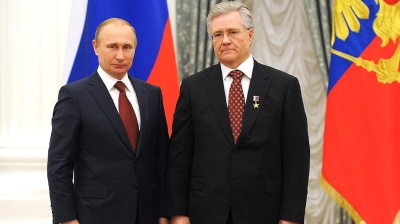 Russia's privately owned Surgutneftegaz famously has an estimated RUB3 trillion in cash, almost as much as Russia's sovereign wealth fund / wiki
By bne IntelliNews May 5, 2019

Russia's privately owned oil major SurgutNefteGaz (Surgut) made more profit from its enormous cash pile than it did from producing oil in 2018, the company reported last week.

The famously opaque company that is nevertheless close to the Kremlin, posted 4.4-fold net profit jump in 2018 to RUB850bn ($13bn) under IFRS. Surgut made one of the largest corporate profits in the country, second to only RUB1.5 trillion of Gazprom and beating other oil majors Rosneft and Lukoil.

Notably, 51% of pre-tax profit was due to RUB529.4bn currency revaluation gain on Surgut's massive and notorious cash pile. Surgut's currency gain was more than that of all other oil major put together (RUB222bn of Gazprom, RUB bn of Rosneft, RUB33.8bn for Lukoil, RUB7.9bn for Tatneft).

In 2018 the cash pile of the company grew by 32% to over RUB3 trillion, making the highest value since 2013. As reported by bne IntelliNews, the company's cash reserves are almost on par with the funds kept in the sovereign National Welfare Fund.

Under the current dividend strategy of 10% of net profit, Surgut is supposed to pay over RUB80bn in dividends for 2018, out of which RUB58.7bn on preferred shares. About three quarters of the dividend payments is due to the profits the company makes on investing its cash pile, with the rest from oil production and in this sense it is more like investing into a bank than an oil company.

Surgut’s huge cash pile has made it an investors’ darling (for the preferred shares), despite the fact that company is notoriously secretive and shares little information with investors. However, the stock has performed poorly this year and is essentially flat versus the RTS index, which was up 16.5% YTD as of the end of April. Overall, Russia’s oil and gas sectors have been underperforming the market this year after a stellar year in 2018 and one of the least popular stocks on the Russian market, returning only 12% YTD as of the end of April.

Despite the lack of enthusiasm for oil stocks, Surgut has maintained investor’s interest as it pays out one of the highest dividend yields of the Russian equity market, the bulk of which comes from interest earned on its cash reserve, making the pay outs independent of the vagaries of the commodity market prices.

Since the consolidation and privatisation of state oil assets in western Siberia in the early 1990s, Surgut has been headed by Vladimir Bogdanov, regarded as something of a sector "dinosaur" by his rivals for his shunning of western debt, technology, accounting standards, foreign partnerships and Moscow as he largely lives on the site of the oilfields. The head of Surgut is believed to have close ties to the Kremlin.

Activist investor and the Kremlin’s nemesis, Bill Browder, told bne IntelliNews that it was Surgut that organised the cancellation of his visa after he published a detailed organisation diagram of the company’s shareholding structure. The accusation was made that one of the hundreds of shell companies show on the diagram belongs to Russian president Vladimir Putin personally. 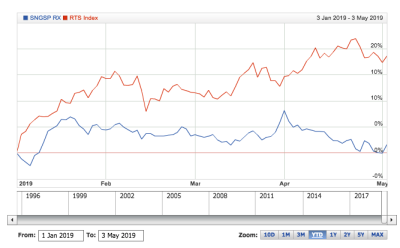