Russia's inflation inches to 8.7% in January, highest in six years 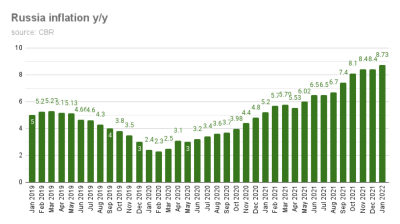 Russia's consumer price inflation in January 2022 continued accelerating, reaching 8.7% year on year and 1% month on month, as compared with 8.4% seen in 2021, according to the latest data from RosStat statistics agency. Inflation in Russia is now the highest since 2016.

As followed by bne IntelliNews, the CBR doubled the key interest rate in 2021 from 4.25% to 8.5%, as it tried to catch up with inflation that persistently trends far ahead of the regulator's target.

The analysts surveyed by RBC business portal believe that inflation has not yet peaked, contrary to previous expectations, with price pressure coming from the food segment and domestically and supply chain disruptions globally. Core inflation remained elevated at 9.24% y/y in January.

At the beginning of 2022 inflation showed no signs of moderating and this week the regulator is expected to continue to hike the key interest rate at a policy meeting on February 11.

Most recently, the governor of the CBR came out with more hawkish comments on structural drivers that will continue to heat up inflation in Russia and globally, which prompted some analysts to revise the key interest rate outlook for 2022 upwards. This week unconfirmed reports claimed that the Ministry of Economic Development also revised its 2022 inflation forecast upwards from 4% to 5.9%.

Even with the acceleration, inflation below 9% y/y was" a positive surprise for the market," BCS Global Markets commented on February 10, noting that the breakdown of January inflation showed that the price growth is less related to demand shocks than before.

January's inflation print fell slightly short of the Bloomberg consensus 1.1% m/m and 8.9% y/y. "That is not a lot, but the expectations undershoot is worth noting," VTB Capital (VTBC) wrote.

"As such, we believe that the CBR should not be in a rush to hike its key policy rate by the same 100bp as it did in December," BCS GM analysts argue, expecting a cautious approach in its February decision and raising the key interest rate by 75bp.

Sova Capital, on the other hand, argues that despite the estimates appearing to be lower than consensus, inflation has shown few signs of decelerating either in y/y or m/m seasonally adjusted terms. Sova thus continues to expect CBR to hike the key rate 100bp at its meeting on February 11, while nonetheless sees a "greater chance of a lower hike and zero chance of it being higher than 100bp".

VTBC analysts see "more reasons to argue that the CBR is on top of the proverbial policy curve, not behind it, and so the policy is likely to be paced accordingly". VTBC sees a 50bp rate hike followed by data-dependent guidance for another 50-100bp of hikes throughout 2022 as "consistent with a calibrated reaction from the CBR to its [previous] revision of inflation projections, from 4.0-4.5% to 4.5-5% for 2022".