Russia’s growth driven by agriculture and wholesale trade in 3Q19 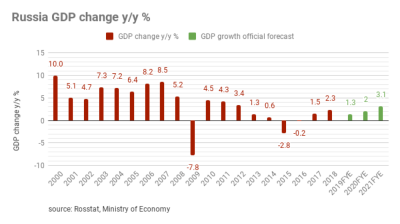 Russia’s growth was driven by growth in agriculture and rising wholesale trade in the third quarter of this year, reported Rosstat in a data release looking at the basic sectors of the economy on October 30.

“The improvement in September was mostly the result of better growth in agriculture, wholesale and construction. The only sector that showed weaker dynamics was retail, where sales growth decelerated despite a pickup in real disposable income,” Anton Stroutchenevski, Rodion Lomivorotov and Artem Vinogradov of Sberbank CIB said in a note. “The stronger basic sectors output in 3Q19 means an acceleration in GDP growth from 0.9% y/y in 2Q19 close to 2% in 3Q19, which is in line with our forecast of 1.3% growth for this year.”

Accelerating growth is welcome after the International Monetary Fund (IMF) recently downgraded Russia’s growth outlook for the whole year for the fourth time this year to 1.1% from the previous 1.6%.

The pick-up comes after a poor August where basic sector output rose by 2.4% y/y, decelerating from 2.5% in July. The slower growth in August was mostly attributable to the agriculture and wholesale trade sectors, which recovered some of their zing in September.

The slowing of retail is bad news as consumption is one of the three big economic drivers in Russia, but another of these, construction, has been improving in the last quarter.

Construction is gradually picking up as the government started to spend more on the so-called national projects in 3Q19: total expenditures were up 16% year-on-year. This provided some support to construction activity during the quarter, according to Sberbank.

“Since budget spending on national projects will likely remain high in 4Q19 and 2020, the positive trend in construction should continue. Year-over-year growth should further accelerate next year due to the low base of the beginning of 2019. Moreover, it is quite possible that the State Statistics Service will revise upward its construction activity data for 2019 next year, as some companies report statistics on construction at the end of the year, meaning that the monthly statistics could underestimate the actual pace of expansion,” Sberbank said in a note.

“One possible reason is the decelerating expansion in consumer loans (excluding mortgages), the growth of, which slowed to 22.9% y/y in August from 23.8% in June,” Sberbank added.