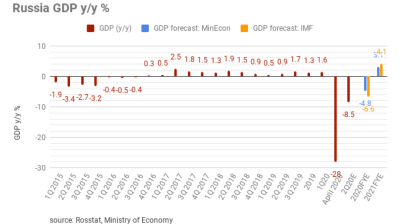 The second quarter of the year took the full brunt of the crisis as many industries were shuttered by the restrictive measures in connection with the coronavirus (COVID-19) pandemic. However, the fall was not quite as bad as the corresponding falls in GDP during the previous 1998 and 2009 crises.

Rosstat data turned out to be better than the previous predictions from the Ministry of Economic Development, which estimated the drop in GDP in the second quarter at 9.6%, and better than the Central Bank's (CBR) expectations of a decline of 9-10%.

The "quarantine quarter” performed better than the crisis in 1998, where the most significant decline was recorded in the fourth quarter of 9.1%, and during the global financial crisis a decade later, where the second quarter was also the worst of the year with a drop of 11.2%.

All of Russia’s sectors contracted with the exception of agriculture. The maximum drops were noted in the commodity sector, retail trade, passenger transportation, as well as in industries related to the provision of services to the population. The least affected sectors were manufacturing, construction, wholesale and cargo transportation, as well as in the provision of electricity, gas and steam and air conditioning.

As bne IntelliNews reported, a non-payment crisis was expected to appear in the utilities sector, but failed to happen.

Agriculture was the only sector that continued to grow, putting in a 3.1% y/y gain.

"While the slump in GDP in 2Q was fully expected, its lower reading is positive, as it means that [the] 2020 decline in the economy could be less dramatic," BCS Global Markets commented on August 12, noting that the 8.5% y/y decline was lower than official and consensus forecasts and significantly below BCS GM estimate of -10.5% y/y.

However, the chief economist of BCS GM, Vladimir Tikhomirov, warns that 2Q20 GDP could be offset by a decline in 2H20.

"In our 2020 forecast, we expected to see a deeper slide in GDP in 2Q but a more robust recovery in 2H than suggested by the latest macro data," Tikhomirov notes.

Still, BCS GM reiterates the 2020 GDP decline forecast of 3.8% y/y, and believe that better-than-expected economic performance in 2Q20 will be offset by a weaker dynamic in 2H20. "Still, our 2020 GDP estimate remains more optimistic than the consensus (-4.2%) and the official forecast (-4.8%)," Vladimir Tikhomirov reminds.

The consensus forecast, compiled by Interfax based on a survey of analysts of leading investment companies, banks and think-tanks at the end of July, in terms of GDP dynamics for 2020 was slightly better than official expectations and assumed a decline of 4.2%, followed by an increase of 3.1% in 2021.

Russia's services PMI falls for second month due to impact of coronavirus
18 hours ago
Romania’s industrial prices surge by 26.8% y/y in October
19 hours ago
Service sector and public spending save Hungary’s Q3 GDP
1 day ago
Kazakh manufacturing PMI shows return to contraction in November
1 day ago
Poland’s PMI climbs to highest point since August
1 day ago